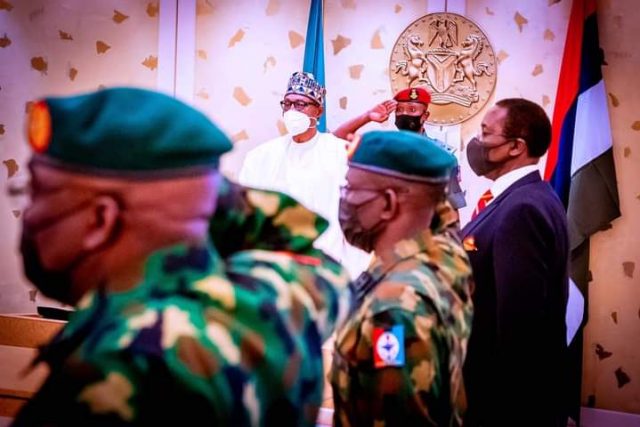 President Muhammadu Buhari is currently meeting with Service Chiefs and heads of security agencies at the State House, Abuja.

The meeting is taking place at the First Lady’s Conference Hall. This is coming a day after a reported burglary took place at the residence of Buhari’s chief of staff Prof Ibrahim Gambari.

The agenda of the meeting was not made public, but it id expected that the meeting would review the current security situation in the country and proffer solutions.

It is also a follow up on the previous two other meetings held on Friday, April 30, 2021, and Monday, 4th of May respectively.

Present at the meeting are Vice President Yemi Osinbajo; the Secretary to the Government of the Federation (SGF), Boss Mustapha; the Chief of Staff to the President, Prof Gambari; and the National Security Adviser (NSA), Major-General Babagana Monguno (rtd).

Also present are the Attorney-General of the Federation, AGF and Minister of Justice, Abubakar Malami; Minister of Foreign Affairs, Geoffrey Onyema; Minister of Defense, Major-General Bashir Salihi Magashi (rtd); Minister of Interior, Rauf Aregbesola; and were also at the meeting.

Problem Of Apapa Port Is Inefficiency – Amaechi, Operators To Help With Reconstruction

Buhari Knocks Govs For Delay In Prosecution Of B’Haram Financiers