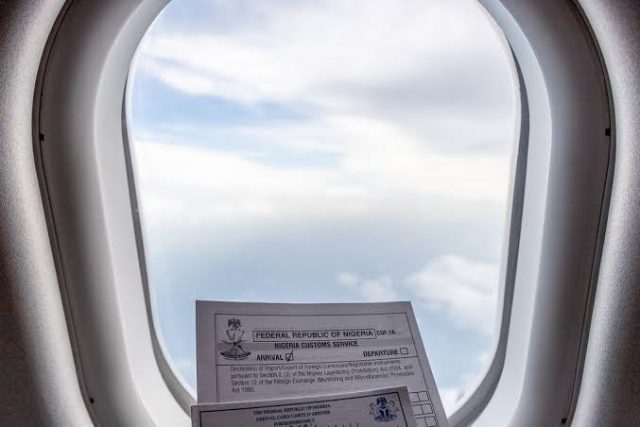 Reports say Nigerian airlines are planning to reduce fares in response to the removal of 7.5 per cent Value Added Tax (VAT). The suspension of VAT from air fares took effect from January 1, 2021, as part of incentives contained in the Finance Act 2020.

Airline operators said on Monday that they have received the directive on VAT removal from the government, but they are waiting for the Federal Inland Revenue Service (FIRS) to implement the directive before the low fares regime comes into operation.

Investigations have shown that fares that were around N90, 000 for a one-way trip on some routes, could come down to as low as N27, 500.

Possible reduction, an operator hinted, would take effect in the weeks ahead after airlines have enjoyed the huge passenger traffic on the return leg for the end of year festivities.

Commenting, Spokesperson of Dana Air Kingsley Ezenwa said airlines were excited over the suspension of VAT, which he said should occasion considerable reduction in air fares.

Another airline official who pleaded anonymity however, said substantial reduction in air fares might not be realisable because even with the suspension of 7.5 per cent VAT on fares, airlines were still grappling with oscillating exchange rate as the airport authority moves to increase Passenger Service Charge (PSC).

Operators, however, expressed divergent views on how the removal of 7.5 percent VAT, hitherto factored into domestic airfares, would affect their operations.

They said though the removal of VAT could bring about considerable reduction of airfares, it was a step taken too late after two years of agitation by the Airline Operators of Nigeria (AON), the umbrella body of local carriers.

In 2018, the government had suspended five per cent charges on imported commercial aircraft and spare parts through an executive order but, the FIRS claimed to be unaware of such a directive, hence it was never implemented leaving airlines confused on the pronouncement.

In an interview at the weekend, Chairman of West Link Airlines Captain Ibrahim Mshelia, however, said the suspension of VAT was a good development for domestic carriers.

“If implemented, the removal of Value Added Tax will ease, standardise and harmonise our system with international best practices. It is a good move in the right direction,” Mshelia said.

Chief Operating Officer, Dana Air, Obi Mbanuzor said Dana Air said: “We are happy about the removal which we feel should naturally reflect on fares and possibly bring it down but with the inflation of other aspects of the chain like dollar rate this might not be possible. We know the government has no control over this but it is a major concern,” Mbanuzor said.

He noted that with all the other extraneous costs being borne by airlines, the adjustment to air fare may be minimal.

“So we are not saying it won’t affect but might be slight because other factors are still springing up and it’s a chain. Policy! Policy! Policy! Will impact the airlines better but this is also appreciated. One step at a time and this is one very good step at getting it right,” Mbanuzor said.

Head, Research, Zenith Travels, Olumide Ohunayo added: “I’m happy to see the implementation of the VAT because in the first place, the airlines were putting it on the ticket and oftentimes as in Virgin Nigeria case, they will not be remitted to the Federal Government and this amount was put on tickets and taken from passengers.

“The fares were loaded with security, fuel surcharge and other charges. I don’t expect much difference in the ticket prices those were the hidden charges airlines benefited from and now it is gone. We expect that airlines should be able to issue tickets stating clearly the fare and what the other charges are; it should not be hidden anymore so we can have some progress in the fare structure,” Ohunayo said.