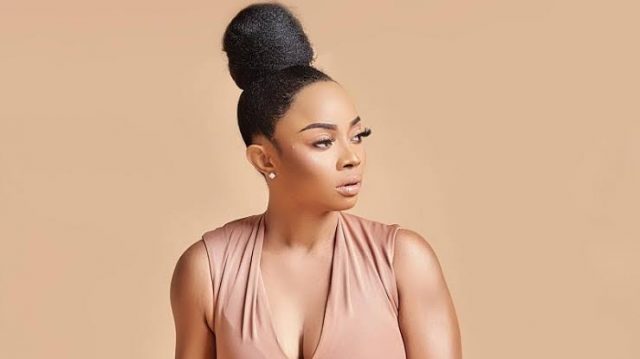 Media personality Toke Makinwa’s Banana Island mansion has reportedly been taken over by the Asset Management Corporation of Nigeria (AMCON).

The home, located in the exclusive Banana Island, Ikoyi part of Lagos State was taken over by AMCON over the inability of the owner to service debts owed a bank amounting to N240 billion.

Sources say that the house worth about N300 million was given to Makinwa by Lagos-based oil and gas businessman, Dr. Festus Fadeyi, whose total indebtedness to AMCON led to the takeover.

Makinwa a popular radio host is also a regular face on Instagram and other media platforms. She’s also an author.

It is understood that the house in question which apparently belongs to Fadeyi, but gifted to Makinwa was recorded by the owner as part of his estate which made the debt manager to possess it. Makinwa and Fedeyi are not known to be in any business or family relationship.

The debts owned by Fadeyi’s Pan Ocean Group ruined Skye Bank in 2018, leading to its takeover by AMCON.

Earlier in July, a Federal High Court granted an order appointing AMCON as a Receiver Manager and its designated nominees (Kunle Ogunba Esq. SAN) its privies and assigns over the assets of Pan Ocean, their corporate guarantors, cronies and cohorts to take over some prime assets of Pan Ocean over the huge debts owed AMCON by both Everest Nominees Limited, Pan Ocean Group and their promoters as well as directors.

The Court in suit No. FHC/L/CS/722/20 ordered AMCON and its assigned designate to take over several oil mining and oil prospecting licenses that are exemplified by OML 147 (formerly OPL 275), OML 152 and OML 98 respectively.

Aside these prime assets of the obligors, Justice Mohammed Liman also ordered AMCON to take over “any other assets, businesses, affairs, undertakings, interests etc belonging to the defendants wherever same may be found.”

He also directed the Inspector-General of Police and his commissioners to assist AMCON and its designates as well as the Court Bailiffs in taking over the assets on behalf of the Corporation.

Jealous Pastors, Agents Of Darkness Who Are After Our Members Brought...