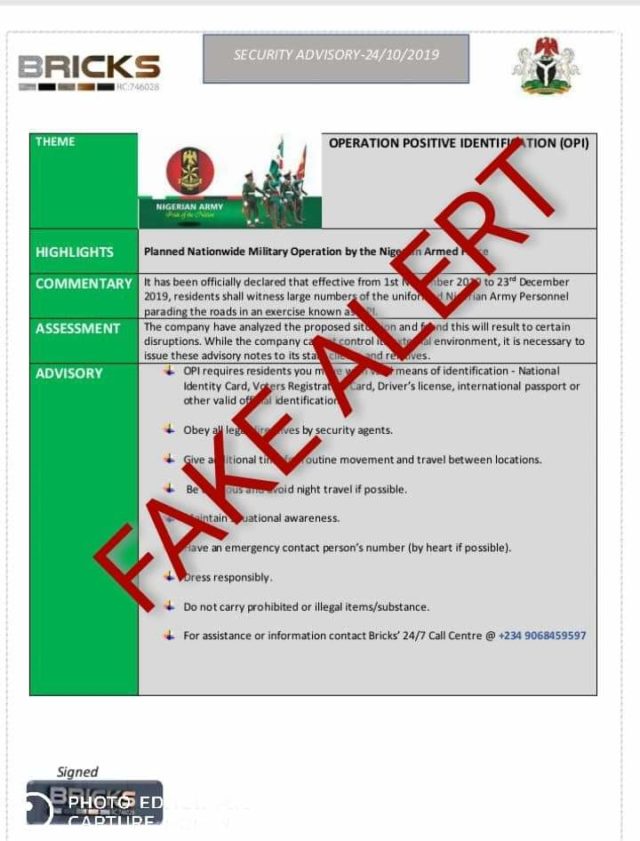 The Nigerian Army has dissociated itself from a report published by a certain Bricks organisation detailing how it will conduct an identity operation, claiming rather that the one conducted by the army is intelligence driven. The Army says that the operation positive identification from 1 November to 23 December 2019 was mischievously peddled on the social media by the organization which alleges that the Army will conduct the operation and went ahead to state how the operation will be conducted.

According the a statement by the Nigerian Army, it says “Bricks alleges that – “residents shall witness large numbers of uniformed Nigerian Army personnel parading the roads in an exercise known as OPI.”

“Similarly, NA has never issued press release through private companies or third parties because it has a full fledged Directorate that coordinates its public relations and Information aspects which has a robust cordial working relationship with the press.

“Members of the public are hereby enjoined to discountenanced the hitherto faceless and mischievous Bricks company and its alleged NA OPI.

“The NA wishes to use this opportunity to enjoin all Nigerians to cooperate with the NA and indeed all other security agencies by giving credible information that will assist in the identification and eventual arrest of the fleeing criminals/terrorists in any part of our beloved country.”