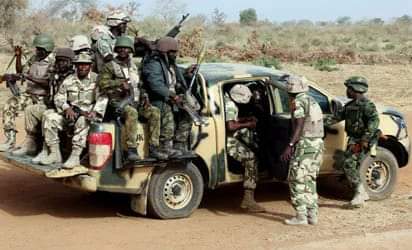 Many bandits trying to escape the ongoing military onslaught in Zamfara and Katsina states met their waterloo in the hands of soldiers at Maganda village near Allawa in Shiroro Local Government Area of Niger State. Shiroro is located on the border between Niger and Kaduna.

The bandits, who were said to be escaping through the notorious Allawa Forest in their hundreds, ran into the military camp stationed at Alawa. They however engaged the soldiers in a serious gun battle for several hours.

Although one soldier was said to be missing at the end of the gun battle, but it was also learnt that scores of the bandits were neutralised and several others escaped into the forest with bullets injuries.

Reports claim that the bandits who escaped with serious injuries are being trailed by the soldiers as the entire forest has now beeb cordoned .

A media source claims that about six machine guns and a number of AK-47 riffles and bags of ammunition were recovered from the bandits.

Another source at Allawa community said, “In fact from the dead bodies that we saw, they look like foreigners, all of them are carrying long hair like women. They don’t have resemblance of Nigerians and they don’t know the terrain that was why they ran into the soldiers. They did not know that there is soldiers camp there.”

Bandits had in April invaded the Military Base in Alawa, and killed five soldiers and a mobile policeman.

The entire military camp was razed by the armed bandits who invaded the base about 3:00 am when soldiers had just returned to their base from an area patrol.

After the invasion of the military base, the bandits moved to the community where they killed seven people and abducted a number of villagers.

Western Lotto Raises Alarm Over Plots by Premier Lotto, Others To Use Judiciary, EFCC...

Report: Crisis Rocks EFCC Over Recommendation To Push Police Out Of...