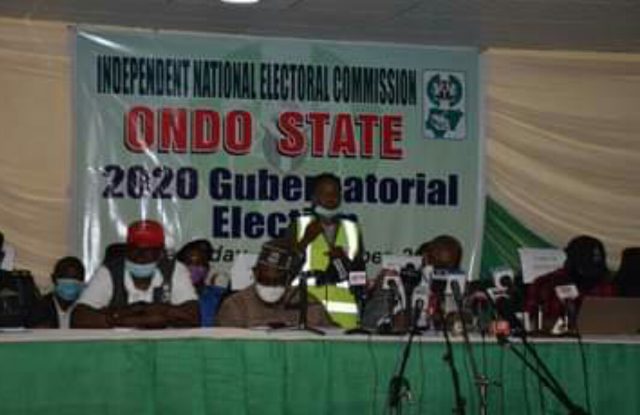 In spite of isolated cases of violence, card-reader malfunction, downpour and allegations of vote-buying, Saturday’s governorship election in Ondo State was largely peaceful.

Voters turned out in large number across the 3,009 polling units, 203 wards and 18 local councils of the state.

At press time, Governor Rotimi Akeredolu of the All Progressives Congress, (APC) had jumped into a comfortable lead over his two closest rivals – Deputy Governor Agboola Ajayi of the Zenith Labour Party, (ZLP); and Eyitayo Jegede of the Peoples Democratic Party (PDP).

Results from no fewer than 2,900 polling units at the Independent National Electoral Commission, (INEC) portal showed that Akeredolu is within a touching distance of being re-elected as his lead appears unassailable.

Indeed the results showed most of the leading political heavy weights delivering their polling units to their various parties. However, some of them lost their units.

Ajayi polled 395 votes to win his Polling Unit 004 – R.C.M at Idumado Quarter, Kiribo in Ese- Odo Local Council. Akeredolu got 13 votes while Jegede scored five votes. The LP and AAC polled one vote each while six votes were voided.

Also, at the second unit in the primary school, Jegede polled 158 votes to defeat Akeredolu (43) and Ajayi (four votes).

Otetubi, Commissioner for Natural Resources, lost his unit as Jegede’s PDP ran away with 182 votes. The APC got 58.

However, the Speaker of the Ondo State House of Assembly, Hon Bamidele Oleyelogun, lost his polling unit to the opposition PDP. His APC polled 180 votes while the PDP scored 240 votes.

Former Ondo SSG Ifedayo Abegunde, lost his polling unit to the PDP. In his Ward 5 Unit 11 Akure South LGA, APC scored 58 votes as against 139 polled by the PDP.

No fewer than 1.4 million voters voted in the exercise in which COVID- 19 protocol was not adhered to in many of polling units across Ondo.

Election materials arrived the polling units by 8am while voting started at about 8.30am across the state despite the downpour in some council areas.

Security personnel manned all the 3,009 polling unit, across the state.

Political parties agents out do one another in vote-buying

Findings showed that the parties gave voters between N5,000 and N10,000 to influence their choice.

The election was also marred by pockets of violence.

A middle aged man, identified as Gboyega, was reportedly shot and rushed to hospital on a motorcycle.

Empty shell of dispensed ammunition littered the road where the incident occurred.

An eye witness, Tope, claimed that the thugs were members of one of the two main political parties.

“They came here in their vehicle with guns, and started shooting as soon as they came out.

One of them went straight to the victim and shot him at close range.

“The hoodlums are here with us, we know them and the people who sent them. One of them was among those who shot people down the street last week.

“The disturbing side of it is that the security men came, saw them with their guns, and yet allowed them to go. In fact, they escorted them to out.”

Police spokesperson Tee Leo lkoro could not be reached for comment.

Two political thugs were arrested in Akure for stabbing a man at a polling unit during the election.

The incident occurred at Ward 4, Polling Unit 002 in the Ijomu part of Akure South.

Deputy Commissioner of Police, Investigation, Ondo State, Lanre Bankole, confirmed the incident, disclosing that the victim had been rushed to hospital.

He added that two suspects were arrested in connection to the crime.

Jegede accused INEC of creating problems in the election but was optimistic that despite the hitches, he would win.

The smart card reader could not initially read his card and he was asked to step aside. The machine could not also read the PVC of Jegede’s wife, Eno, but his daughter voted without hitch.

However, the couple voted about 10 minutes later.

Ad-hoc officials of the INEC had been conducting the exercise smoothly before it was the turn of the PDP candidate and his wife who arrived at the venue at about 9:07am and later joined the queue to cast their votes.

They waited for about two hours on the queue before it got to their turn at about 11:02am.

However, the smart card reader failed to read their thumb-prints while they stepped aside for the next voter on the queue to get accredited.

A few moments later, the issue was resolved and the couple was allowed to cast their ballots.

Despite the development, Jegede condemned the setback and faulted the long voting time.

He questioned why the card reader failed when it was his turn and that of his wife to vote. The PDP candidate also decried the absence of tech experts from INEC at his polling unit.

“But despite all these hitches, there has not been major disruption. But I don’t know what is happening in remote areas. The turnout has been massive, voters conducted themselves well. I am aware there are pockets of violence at Ijomu area. I also heard of incident of vote-buying.

“In Owo, for instance, a former commissioner led thugs to attack one Sadiq Obanoyen and injured him in a patrol vehicle. These are incidences of violence. But by the grace of God, we will still win.”

On his part, Ajayi said that security arrangement for the election was compromised.

The ZLP candidate spoke after casting his vote about 10.32 a.m.

Lauding the large turnout of voters, he said: “Ondo State people are ready to vote freely. In any contest, there must be a winner. They should have allowed the process to be free and fair.

“You can see the turnout has been very encouraging here. But I want to also say that the way we have seen it here, the security arrangement is a bit compromised which is not exactly what happened in Edo State.

“I want to appeal to the security agents to live up to expectation, be neutral, see that every Nigerian’s vote counts. INEC has put in place so many measures and I want to believe they are not also part of this conspiracy.”

God will give me victory – Akeredolu

Speaking after casting his vote alongside his wife, Betty, Akeredolu said: “I am confident about winning this election. I have always said that mine is about God. I know that God in his infinite mercy will give me victory. My confidence is in God.

“I don’t know what will happen. All I know is that when my victory is announced, everybody will be joyous, there will be clapping and singing.”

The governor, who described the voting at his unit as peaceful, urged voters to protect their votes.

“Cast your votes, move out of the place but don’t move too far, and ensure that you protect your votes so that your votes can be counted,” Akeredolu said.

Meanwhile, the PDP and APC disagreed over alleged rigging of the poll in Owo area.

Owo is the hometown of Akeredolu.

Gbenga Akinmoyo, spokesman for Jegede, in a statement, said: “We were told that INEC and law enforcement agents would be on top of events, but we didn’t know some people were above the law.

“An APC leader is moving from one unit to another in Owo LGA preventing people from casting their votes unless they are voting for APC. Votes for other parties are being torn by him.

“Why is he permitted to move throughout the state wreaking havoc? There is no free, fair or credible election holding in Owo LGA.’’

Countering, spokesperson for Akeredolu Campaign Organisation, Richard Olabode Olatunde, said: “ This is false and a shameful excuse from a failing political party.

“The accused APC leader is one and he cannot reproduce himself in other units. As we speak, he has just voted in his Unit Igboroko Ward 3 Unit 2. Voting is in progress there and the exercise is peaceful.

“The truth of the matter is that because of the fact that the governor is from Owo, PDP’s strategy is to continue to make spurious allegations to discredit the exercise in Owo.

“Don’t forget that the PDP entered Owo and attacked the people few weeks ago in order to create fear in them and scare the people from coming out to vote today. Having failed, they have resorted to making spurious allegation.

“We continue to warn the PDP to stop judging us with their standard. We are wide apart. The PDP has unleashed terror on members of the APC in Akure South.

“They have caused attacks in some polling units today. From the report from the field, the PDP is heavily inducing voters but the people are resisting them with their money.’’

Vehicles conveying newspapers were delayed for the whole day by soldiers at Ajebandele, a border town between Ogun and Ondo states.

As of 7pm, the vehicles were still being detained.

The Centre for Democracy and Development, CDD, and YIAGA Africa, which monitored the election, decried the incidence of vote- buying during the poll in their different preliminary findings last night.

YIAGA said it received reports of vote-buying from Akure South LGA, Ose, Ondo West, Ilaje, and Akure North. “Across several polling units, the secrecy of the ballot was severely compromised despite attempts by polling officials to prevent voters and party agents from showing how ballot papers were marked. These electoral offences occurred in the presence of security personnel who made no attempt in some cases to reprimand the culprits,’’ the group said in a statement.

On its part, CDD said “vote buying trends as highlighted in the preliminary reported includes earmarking of bulk sums ranging from N150,000 to N600,000 for each polling unit across the LGA.”

The group explained that during the election, money was distributed to popular figures, especially leaders of youth groups, to share to voters in their areas.

“Our observers reported that party agents largely stayed away from coordinating vote-buying.

CDD observed that political parties designated someone, who is not a party agent, but appears to be neutral to direct voters to an outpost where cash could be distributed,” the group said.

CDD also reported flashes of violence, saying that towards the end of voting, there was an upsurge in attacks targeted at INEC officials.

“As of the time of reporting, CDD has been receiving reports of attacks targeted at INEC staff and personnel. In Akure South LGA, CDD observers reported cases of hoodlums chasing away Registration Area Centres technicians. If RAC techs are chased out of the polling units and prevented form carrying out their duties, it compromises the transparency of the process because of the upload of results unto the INEC Results Viewing Platform.

“The same RAC techs are the ones who have the responsibility to maintain smart card readers. Preventing them from doing their duty also creates problems in the area of maintaining card readers, which develop fault in the course of the election. These and similar incidents occurred in Ward 05, PU 008, Odigbo LGA, Arogbo II, PU 001, Ward 7, Ese Odo LGA, Ward 06, PU 007, Ward 02 PU 16 in Idanre LGA, and Ward 4 PU 09, 11, 12 and 13, Ilaje LGA.”