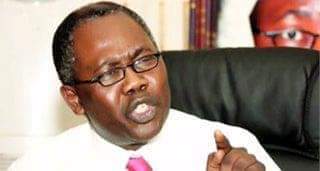 An Abuja High Court has granted former Attorney General of the Federation, Mohammed Adoke bail in the sum of N50m and one surety.

The former AGF who is alleged to have received about N300 million over Malabu oil deal OPL 245, is facing 42 counts charges.
He is being charged alongside Aliyu Abubakar, Rasky Gbinigie, Malabu oil and Gas Limited, Agip, a subsidiary of Eni, Shell Nigeria Ultra deep Limited and Shell Nigeria Exploration Production Company Limited.

According to the ruling on Thursday, the surety must be a Nigerian citizen with landed property within the jurisdiction of the court.
The surety must also appear with the defendant throughout the period of trial.

Mr Adoke was asked to deposit his international passport with the Registrar of the court.

Justice Othman Musa who gave the ruling also granted bail to the second defendant, Aliyu Abubakar in the sum of N50m with two sureties who must have landed properties within the jurisdiction of the court.
Abubakar is also to deposit his international passport with the Registrar of the court.

The sitting Judge stressed that any breach of the bail conditions during Abubakar’s trial will lead to immediate revocation. The sureties are also expected to attend the trial with the defendant. Similarly, the third defendant, Rasky Gbinigie has been granted bail in the sum of N10m with one surety.

Mr Gbinigie was asked to sign an undertaking not to interfere with the trial or further investigation by the EFCC.

Use Your May 29 Speech To Accept Failure, PDP Asks Buhari

N1.2Bn Spent In Cinemas By Nigerians In Two Months

Between The Devil And The Deep Blue Sea