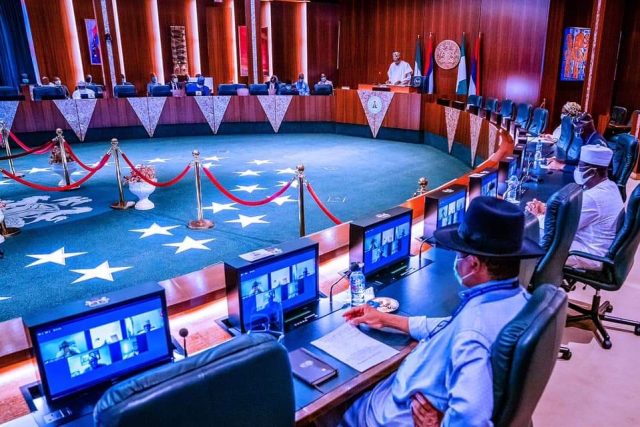 The federal government has inaugurated the National Steering Committee for the development of the Nigeria Agenda 2050 and the Medium-Term National Development Plan (MTNDP).

Inaugurating the committee in the Executive Council chamber of the State House, President Muhammadu Buhari explained that the new programmes would succeed the Vision 20:2020 and the Economic Recovery and Growth Plan (ERGP) 2017 – 2020, respectively.

The committee, which is co-chaired by the Chairman of Stanbic IBTC Bank, Atedo Peterside, and the Minister of Finance, Budget and National Planning Zainab Ahmed, drew membership from diverse interest background, including representatives of opposition political parties, private sector, women and youth bodies as well as people with special needs.

Other members of the National Steering Committee include: ALGON, captains of industry, Labour organizations, farmers’ associations, traditional and religious leaders and members of the press.

Highlighting the focus and purpose of the committee, President Buhari pointed out that government is working towards lifting a hundred Nigerians out of poverty in the next 10 years, saying this had become necessary considering the World Bank projection that Nigeria would become the third most populous country with around 400 million citizens by the year 2050.

”The main objectives of these Successor Plans are to lift 100 million Nigerians out of poverty within the next 10 years, particularly given the World Bank’s projection that Nigeria will become the world’s third most populous country by 2050 with over 400 million people”, he said

The President noted that it had become necessary to develop Successor Plans to the Nigeria Vision 20:2020 and the ERGP, which both would lapse in December this year, in order to ensure continuity and efficiency in the country’s development planning.

On the mandate of the National Steering Committee, President Buhari said it would oversee governance structure comprising the Central Working Group and 26 Technical Working Groups for the important national assignment.

”It is my expectation that the Steering Committee will oversee the execution of key deliverables, including recommending measures to ensure the continuous implementation of the Plans even after the expiration of the tenure of successive Administrations – including legislation, if required.

”Such legislation may introduce much-needed rigor and discipline to the nation’s development planning as well as institutionalise planned outcomes for the future. I trust that our partners in the National Assembly will support us in exploring these reforms, ” he said.

President Buhari urged the National Steering Committee not to lose sight of the important role Nigeria plays on the continent as well as in the global community.

He said the successor-plans must, therefore, be designed to sustain national development, as well as support regional and global strategic interests, as outlined in the African Union Agenda 2063, the ECOWAS Integration Agenda 2050 and the Sustainable Development Goals 2030.

Underscoring the importance of national development planning, the President said if carefully conceived and diligently implemented, it can transform the economic fortunes of the nation.

”The Chinese experience is an example. It has resulted in lifting over 700 million people out of poverty over the last four decades. Indeed, China’s track record of positive economic growth, since 1992, was only halted in the first quarter of 2020, due to onset of the COVID19 Pandemic.

”COVID19 presents the world – and Nigeria – with a crisis as well as an opportunity. The current global health and economic crises give us an opportunity to think afresh and chart an optimal path forward, ” he said.

The President recalled that in February 2017 when he launched the Economic Recovery and Growth Plan, its objectives included, restoring and sustaining growth, investing in people and building a globally competitive economy.

On the other hand, he said Nigeria’s Vision 20:2020 was an articulation of the long-term intent to launch Nigeria onto a path of sustained socio-economic development.

”The ERGP shared this vision, which ensured that the country exited recession in 2017 and sustained growth in Gross Domestic Product until the recent global economic challenges occasioned by COVID19.

”Over the decades, successive planning and visioning exercises have guided investment in human capital development, the implementation of our infrastructural roadmap, and supported social investment in our people’s lives and livelihoods, ” he said.

He, however, wished the committee success in its assignment, adding that he looked forward to receiving regular reports of deliberations.

On the composition of the committee, the President said in order to ensure a truly consultative, participatory and inclusive planning process, the membership will comprise representatives of one State governor from each of the six geopolitical zones, the Senate and House of Representatives, ministers and representatives of key agencies.

”At the heart of the Successor Plans is the partnership between the public and private sectors, with Government as the enabler of private sector investment and industry,” the President said.

In her remarks, the Minister of Finance, Budget and National Planning, Dr. Ahmed noted that lately, various zones of the country have been pursuing different economic cooperation within their areas.

She, therefore, urged that the new Plans consider the comparative advantages available in these regional blocs to build a virile Nigeria.

”Although the two National Plans are on their way out, the question that will remain on the lips of Nigerians and which we must be ready to provide an answer with little or no prompting as we progress with the preparation of the successor Plans, is how much the Plans have transformed Nigerian economy.

”As the National Steering Committee for the preparation of the new Plans, we must therefore strive to give hope to the great citizens of this country with the quality of Plans that we are coming up with, ” she said.

Also speaking, the co-chair Mr. Peterside pledged to work as a team, commending the President for making the Committee very inclusive.

For a development plan to be successful it has to be inclusive, people should take ownership. Meaning the people must have been consulted. He said the composition has passed the test, includes major political parties, governors, etc.

He said in the past these groups were not brought in hence they discredited every effort of government.

We will learn from past mistakes. Although these are difficult times, it is also the best time to get people together to think about the future.

He thanked the president for the confidence reposed on them and promised to carry the assignment to the later.

“For a development plan to be successful, it has to be inclusive, people should be consulted, own it and believe it is working for them,” he said.

Buhari Signs Bill Which Will Improves Police Funding Into Law

BMO Hails Nigeria’s Ranking As Most Valuable Country In Africa

Why Ministers Were Asked To Go Through Chief of Staff, by...