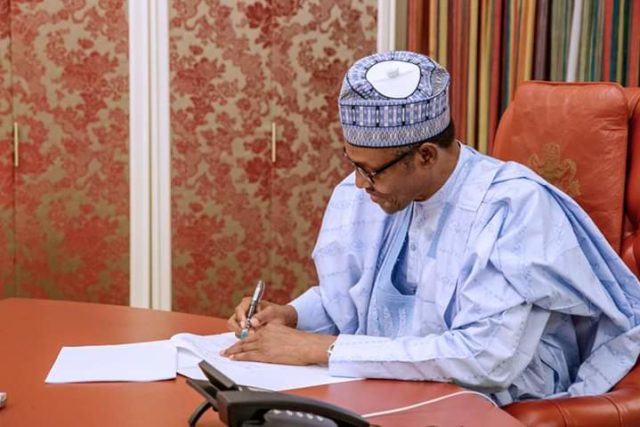 President Muhammadu Buhari insists that no cabal exists in his government. In an interview with The Interview magazine, the president shed light on a number of other issues.

Q: We have not heard much about the Professor Doyin Salami-led Economic Advisory Council after it was inaugurated in October. Why?

A. They don’t have to play to the gallery in doing their work. They don’t have to do it on the pages of newspapers, but rest assured that they are working quietly and efficiently. Results are what matter, and you will see their influence on our economic policies in due course.

Q. Even though the general election ended nearly seven months ago, the country still appears to be in campaign mode, with politicians discussing 2023 as if it was next year. What do you think is responsible for this?

A. It is often said that while statesmen think of governance, and how they can make things better for their country, politicians think of the next election.

Elections, as necessary as they are in a democracy, must not consume our entire lives, times and resources. We must give space for the development of our country. I am hundred percent concentrating on how we can move the country forward economically; how we can bring about peace and security to our country.

Q. After you won re-election in March, you said the next four years will be tough. That has been given different interpretations, including concerns of greater economic hardship. Was that what you meant?

A. I meant tough in terms of decisions we would take (and which we are now taking) and not in terms of hardship for the people. But those who love to twist everything attempted to change the meaning. But we are glad that those who know really know. No good leader should wish his people tough times at anytime.

All Federal loans contracted are directly earmarked for infrastructural projects. Those who are interested can check with various Ministries. Some of these loans are also self-liquidating. A win-win situation

Q. Your comment at last year’s NBA conference in Abuja, suggesting that national security takes precedence over the rule of law, has been used to criticise the government’s human rights record, especially the extended detention of Sambo Dasuki and Omoyele Sowore in spite of court orders for their bail. How does your government prioritise the rule of law?

A. The two examples you cited are still before the courts, so the less said on this matter, the better, lest we be in contempt of court.

Q. You once described yourself as a “reformed democrat”, but lately your critics have insisted that you’re still a “dictator”, in fact, “a military dictator,” citing heavy-handed police tactics against protesters, for example. What do you think it would take to change this perception?

A. You called them critics. If they are critics, you would hardly expect them to garland me. Rather, they would look for things to try and de-market me. But I am glad that as they do that,

millions of Nigerians know who their President truly is, and they have made it clear in 2015 and 2019 presidential elections. All countries, including the old democracies must maintain law and order. If you look around the world, our policing operations are as restrained as any.

Q. Did it worry you that PUNCH took a stand to call you “Major General (rtd)” instead of “President”; and to address your government as “regime”, as symbolic protest over the government’s disobedience of court orders?

A. Am I not a retired Major General of the Nigerian Army? I didn’t just pick the rank in the streets, I earned it.

Q. Does a “cabal” really exist in your government, or is it just a phantom description based on insufficient information about the extent of influence some close aides or relatives have over you as President?

A. I addressed this matter before. I was the one who went round the country on campaigns, and I was the one voted into office as President twice. No one else did, and no one else took the oath of office, and can exercise the powers of a President.

Q. You promised to lift 100 million Nigerians from poverty in the next ten years. But the forecast for the five to ten years is not very encouraging, especially because population growth may outstrip GDP. How do you intend to balance the dilemma?

A. Always keep your eyes on the future, a future filled with hope. If you keep looking back, you may stumble and fall. We have announced our intention of starting the process of lifting 100 million out of poverty in 10 years, and we keep it ahead of us as a goal.

We work towards it, and will hand over the baton to succeeding governments.

Every positive Nigerian should wish government well. We must work on our GDP to be positively relative to our population. Our population potential is a great plus to us in our relations with the outside world. A prominent international magazine has recently forecast Nigeria to be the next major economic power.

Unbiased international commentators see our enormous potential. But some blinkered Nigerians see nothing good in the government of their country and take delight at each turn to disparage us. But time and our policies will prove them wrong.

Q. In spite of your government’s assurances that Nigeria’s debt-GDP ratio is relatively low, there is still the feeling that we’re over-borrowing – that what the country needs is better revenue, and not to pile on debts. Do you agree?

A. The feeling. That is what you say. Financial matters are explicit, and you don’t run them by feelings.

Those who know, both nationally and internationally, say our borrowing vis-a-viz GDP, is under control, yet some people continue to comment without much understanding.

But we continue to do what is needful, for the good of our country. All Federal loans contracted are directly earmarked for infrastructural projects. Those who are interested can check with various Ministries. Some of these loans are also self-liquidating. A win-win situation.

Q. At a recent book presentation, General TY Danjuma (rtd) said the country was in a deep hole and that if he opened his mouth, Nigerians won’t be able to sleep. That appears to be a vote of low confidence in your government.

A. And what is the vote of confidence of Nigerians in me, as expressed in the polls last year? That is what matters more, not the opinion of one man.

Q. How would you describe your relationship with Vice President Osinbajo, on a scale of one to ten?

A. Perfect. Or has he complained to you? (Laughs) Thank you very much.

Q. On the whole what major gains do you think the country made in 2019?

A. Read my letter to Nigerians on New Year Day. The question was well answered there. The progress was on many fronts.