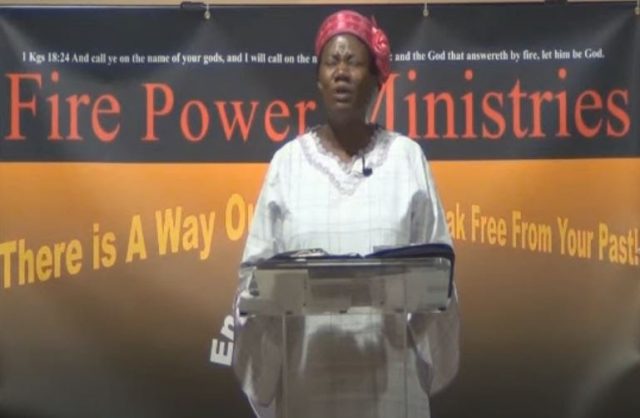 Nigerian-trained Dr. Stella Immanuel who is based in Houston, Texas, United States, once claimed that gynecological issues like infertility, cyst are caused by “demonic spirits”.

Immanuel became an overnight internet sensation after she claimed, in a viral video on Monday, that she treated over 350 COVID19 patients with a combination of hydroxychloroquine and other medicines.

In the video, the Cameroonian-born US citizen, listed drugs used to cure COVID19 as hydroxychloroquine, zinc, and zithromax.

But hours after her video went viral, DailyBeast reported that Immanuel, who is also the founder of Fire Power Deliverance Ministry, made a series of strange medical claims as well as political ones during her sermons in the past.

In 2013, Immanuel reportedly said medical issues like endometriosis, cysts, infertility, and impotence are caused by having sex with “spirit husbands” and “spirit wives” in dreams.

She was also said to have blamed ailments like fibroid and cysts on “demonic sperm after demon dream sex” — an activity she claims affects many women.

“They are responsible for serious gynecological problems. We call them all kinds of names—endometriosis, we call them molar pregnancies, we call them fibroids, we call them cysts, but most of them are evil deposits from the spirit husband,” she was quoted to have said.

“There are those that are called astral sex. That means this person is not really a demon being or a nephilim. It’s just a human being that’s a witch and they astral project and sleep with people.”

In another sermon in 2015, Immanuel was said to have claimed that there was an Illuminati plan hatched by “a witch” to destroy the world using abortion, gay marriage, and children’s toys, among other things.

She reportedly said a wide variety of toys, books and TV shows — from Pokémon to Harry Potter and the Disney Channel shows — were all part of a scheme to introduce children to spirits and witches.

In the same sermon, she said the American government is run in part by “non-human reptilians” and aliens.

“There are people that are ruling this nation that are not even human” while narrating a conversation she allegedly had with a “reptilian spirit” which she described as “half-human, half-ET”.

She also claimed that DNA from space aliens is currently being used in medicine.