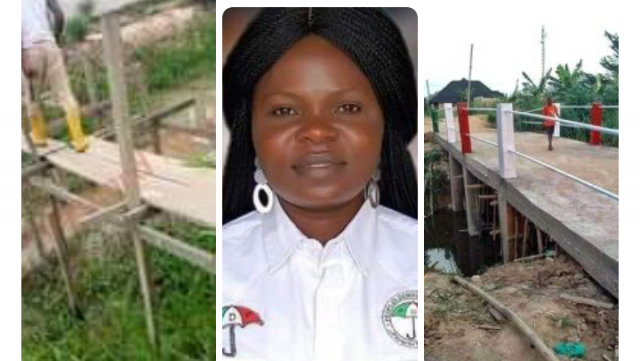 Celebrated Bayelsa State councillor, Tyna Miracle Onem, has rejected offers for a GoFundMe or any other fundraising campaign planned on her behalf by members of the public.

Recently, the took notice that the 31-year-old councillor (ward 2) in the Ogbia Local Government Area of Bayelsa State had used money meant for the purchase of her official car to instead pay for the construction of a concrete motorable bridge which links over four communities in her ward. Former President Goodluck Jonathan hails from the same place.

She had done this despite the discouragement from people who warned her of the monetary expense of such an undertaking.

Photos of the bridge, before and after construction, had gone viral and members of the public appreciated Tyna for her selfless service. The public commendation also reportedly drew the attention of Bayelsa State Governor, Duoye Diri, who invited the councillor to the state Government House.

Using her Twitter account on Sunday, the celebrity councillor, however, turned down emerging offers of fundraising from members of the public, urging her to do more for her people.

She wrote: “After due consultations from well-meaning Nigerians home and abroad, I want to formally decline the offer to raise a GoFundMe or any form of CrowdFunding for any purpose whatsoever.

“I appreciate every effort so far, but this decision is necessary and does not mean to make anyone feel bad.”

“While I am (focused) on making (a) lasting impact within the little at my disposal, I know and I believe without doubt that H.E Senator Douye Diri will support me [to] do more for the people.

“Let’s all stay focused on being a true Servant to the people,” she added.

Major Thing I Want To Do Is Build Another Airport – Obaseki

‘It’s Satanic, Will Snuff Life Out Of Church’ – CAN Rejects CAMA