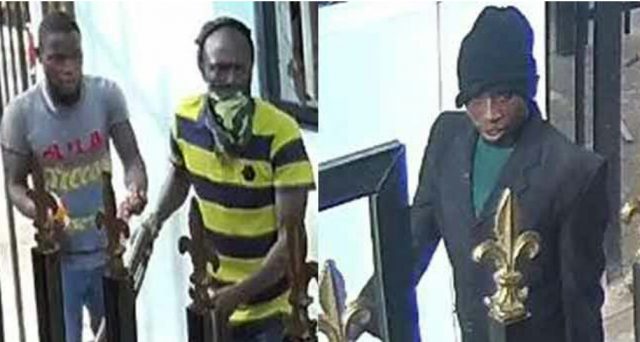 Danjuma while testifying at the resumed hearing of the trial of five accused persons charged for the robbery also said 21 AK47 rifles were stolen from the armoury of the police station during the robbery operation.

The police officer, who was the first eyewitness to testify before Justice Haleema Saleeman of a Kwara State High Court sitting in Ilorin, also narrated how he escaped being killed in the robbery operation.

The five accused persons standing trial for “Conspiracy, Armed robbery, possession of Firearms and Ammunition and Murder” are Ayoade Akinnibosun, Ibikunle Ogunleye, Adeola Abraham, Salahudeen Azeez and Niyi Ogundiran. They were all brought to court on Monday.

He gave the names of the police officers and men that were gunned down by the suspected robbers as Julius Pelemo (ASP), Yusuf Danjuma (Inspector), Grace Makinde (Inspector) and Oke Kayode (Inspector).

He narrated further: “On the said date about 4:45 pm I heard a gunshot from the direction of Captain Cook Eatery Junction in the town; two minutes interval I heard sporadic shootings from that direction heading towards my police station. Immediately, I came out of my office to the charge room (counter). The shootings were approaching the station.

“In response, I also fired gunshots into the air from my pistol. As a result, there was a temporary stoppage of shootings from outside. Suddenly, the shootings started coming in from different directions towards the station. A lady who was manning the pedestrian gate was shot in one of her arms making her abandon the place and ran for her dear life. The shootings continued.

“Thereafter, the robbers released explosive into the security tower of the station. Another explosive was released and it hit the main road and bored deep hole on the road. This melee disorganised the whole station. Then, the ammunition in my pistol had got exhausted.

“At the back of the mosque, I sighted three of the armed robber chasing ASP Julius Pelemo to the back of the station’s fence. Then, I heard the shout of the late Julius after a gunshot. I heard one of the robbers calling those that ran after the late ASP to come over to the charge room (counter). One of them entered the Surveillance Office and shot dead a policewoman. Two of them ran to the charge room (counter).

“I now changed my position to the toilet near the back of the fence. At that place, I was able to communicate with the state Commissioner of Police, deputy commissioner, operations and the command’s spokesperson seeking for reinforcement. While this was happening, simultaneously, I was hearing gunshots at the banks’ direction in the town. I was also hearing explosions and accompanying flames around the bank’s area.

“At an interval of between five and 10 minutes, I would hear shootings from the charge room, making it impossible for me to come out of the toilet. After a while, I heard shouts from the town that ‘olee they don go.’ From the toilet, I headed straight for the charge room and then for the armoury to see the level of damage. When I entered the armoury I discovered that they had broken the armoury key. I went to my office and took my office padlock to lock the armoury.”

The police chief said three civilians killed in his station by the robbers were one suspect and two witnesses.

He continued, “while I was planning to take corpses of the deceased to the mortuary, the Administrative Officer of Mopol came into the station with two police officers shot dead at their duty post in the banks. In addition, other people brought in corpses of civilians killed by the robbers.”

He said he was instrumental to the conveyance of the 17 corpses to the General Hospital in Ilorin for autopsy and got their death certificates of the deceased.

Hearing of the case was adjourned till Tuesday.

EFCC Arrests Two Lecturers, 28 Others For Internet Fraud In Kwara

Sanwo-Olu Sheds Light On His Programmes, Gives Reasons For Delays