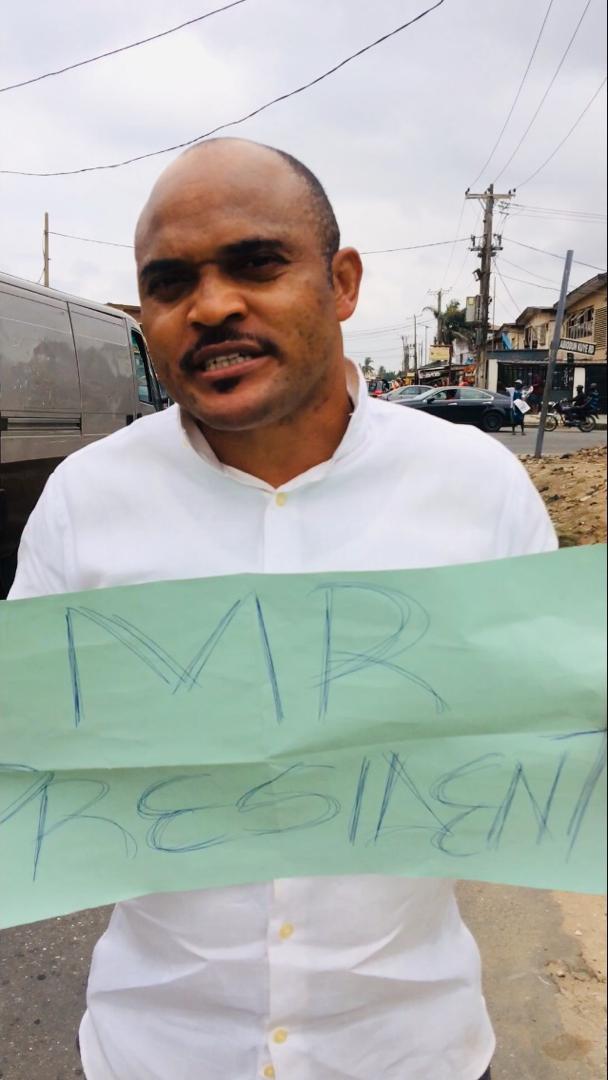 Since the federal government approved increase in electricity tarrif, the rate of estimated billing has gone through the roof.

Nigerians who are yet to get meters are groaning under the weight of bills far higher than their actual use. It appears no one cares. Not even the induatry regulator Nigeria Electricty Regulatory Agency (NERC).

But Chris Asuelime, a pastor who is the President of Chris Rock Ministries and the Creative Director of TenMarch Communication Ltd has since embarked on a solo protest in Lagos.

The socio-political crusader, public speaker and Project Management Consultant says it is time Nigerians reject estimated billing system as it is the greatest official robbery ever known.

Q. You have launched a protest against estimated billing for Monday, who and who do you expect at the march?

A: Let me start by appreciating your deep concern for Nigerians as regards the disservice of electricity provision and management. Yes, I’m calling out Nigerians to an open protest against the brutality of DisCos RAPE of Estimated Billing. I expect well meaning Nigerians that are pained by the oppressive system in the power sector that Nigerians are tormented with to grace the protest movement. I’m expecting Nigerians that stand for justice, fairness and sanity to join the protest walk in total rejection of the menace of Estimated Billing. There is no age barrier to the Nigerians expected for the protest march.

Q: We noticed that you have been carrying on with this lone protest in Lagos against DISCOS, it appears their services have gone from bad to worse, what’s your specific experience?

A: I said to Nigerians on the 31st of July that I was embarking on a ONE MAN protest for 31 days in the month of August and I did that. I was on the streets of Lagos daily with placards condemning Estimated Billing, demanding Nigerians arise to fight back and calling the attention of the relevant authorities to do what is right by the people to stop the menace of Estimated Billing. I decided to go solo for some reasons. Firstly, I couldn’t wait for many Nigerians that weren’t sure if they really wanted to fight and secondly, I considered respecting the safety measures of COVID19. On the ultimate, I couldn’t sit out my deep passion to confront the ills of DisCos impunity and disrespect for over 100 millions Nigerians under the torment of Estimated Billing.

In fairness to DisCos, I saw a leap improvement in their services during the COVID19 lockdown but just after then, it nose dived to the traditional epileptic shame it was and just like you rightfully observed, it went worse. It’s such a big shame this is our electricity experience in 60 years of independence despite the accumulated massive resources available to successive governments to manage on behalf of the people over the years.

Q: Electricity companies continue to complain about funding even after the federal government invested about N1 trillion in them in the last five years, is funding alone the problem?

A: It’s all a joke seeing how DisCos cry over fund paucity with the huge investment of government in financing them. At some point, I was deeply concerned about how government was pumping in fund to support DisCos knowing they are more of a private business. It’s really strange they could be saying they are short funded. What Nigerians should be concerned with in this regard is the management of their financial circle. This should take us back to the set-up of the DisCos, who their original owners are, the intent of the investors and the actual game they are playing.

The rot of the DisCos finances was exposed when this administration ordered a forensic audit on the DisCos bank accounts and how they have responded to it. They were so rattled that they threatened to quit if FG continues with the intention to carry out the forensic audit. If they have nothing to hide, why would they be dead afraid of such call to accountability check? And I strongly think members of the public should be concerned with whatever they are hiding.

Q. Customers are now paying exorbitant fees for meters which are in fact properties of the DISCOS, what kind of business module is this?

A: The DisCos came into operation with the hidden agenda to mindlessly milk Nigerians to the bone. They figured out that the most comfortable way for them to achieve their aim would be the reign of blind billing system where the consumers of power would have no idea of what they consumed. It is an extortion agenda, a structured open theft system and they built their gain projection on in the system of day light robbery of Nigerians. It is a well calculated game plan and so, anything to would put a check to their ploy must be frustrated.

It is common knowledge that the metering system would end the reign of their abusive gains via Estimated Billing. The fairness of metering is abomination to them, a threat to their cheat system and for their survival, the metering pattern must not fly.

The simple reason behind the high cost of meters is to frustrate and discourage Nigerians from acquiring the gadget. In the process of my campaign against Estimated Billing, I have come across many Nigerians that have paid for meters and for months running that have not been given the meters and still placed on Estimated Billing. I know of a few that are complaining of the delay in the provision of the meters they have paid for running into over a year and still counting. The ploy to cheat is obvious and in the open. It’s shameful DisCos operate in such wickedness.

The dimension of Nigerians paying for meters that becomes the property of DisCos is an act of heartless rape. How daring is such insanity? I would have thought they make meters available to Nigerians and that gives them express right of ownership and legally structured permission to prosecute the tampering with the meters. This should have been the run on play with strong legislation to protect their investment and push criminal minded individuals away from committing the crime of readjusting the reading process of meters with the intention to cheat.

Q. How come it is difficult for government through it’s agencies to stop DISCOS from stealing from Nigerians in the name of estimated bills?

A: Who are the real owners of DisCos? These are powerful individuals that were allies of the government that presided over the licensing operation and some of them could be fronts for top government officials that managed the process at the time. To protect their vested interests, they put their intimidating influence to work and possibly throw money around to compromise those saddled with the responsibilities to do what is right within the regulatory capacity. These people are only concerned about the unimaginable profit they make without caring if millions of Nigerians are breaking and bleeding under their claws fastened on the skin of the people.

It’s shameless that government officials are suspected in collaborating with the predators to cheat on Nigerians in the manner that Estimated Billing throw thorns on millions of Nigerians. The operations of the saboteurs within government is another name for terrorism.

Q: My eletrician told me that Ikeja DISCO sent a bill of N25, 000 for July in their two~bed apartment with no air conditioner or freezer, my worry is how does the electricity company expect this man who lives alone to pay?

A: It’s painful how the rich steals from the poor. The case of your electrician is pathetic but mild compared to the story of many others that I know about. I have seen many Nigerians that could no longer cope with the hellish extortion of DisCos Estimated Billing and as a result are yanked off from power supply. You can imagine the mental torture such Nigerians are subjected to being in perpetual darkness while their neighbours that could weather through the extortive bills access electricity. Imagine the unbearable frustration they are cornered to going round to others to beg for the use of electricity. Imagine the embarrassment they are exposed to and how their human value has been reduced to rag status. This evil is in the ranking of the cruelty of hell.

Q. Also people accumulate these estimated bills which now become debts that no one can verify. How can the Nigerian state help Nigerians stop this robbery?

A: It’s common how that countless numbers of Nigerians arrive at electricity debt in the tune of hundreds of thousands of naira that are not justifiable. There are cases of people moving into new apartments and are forced to inherit electricity debt they did not consume. Some communities are cut off from power and their billings continue. We see this mad injustice everyday and government is doing absolutely nothing about it.

In an ideal system where human value is respected, the government should have mediated on the huge debt problem that are mostly unjustly accumulated that the power providers are grossly guilty of. I’m not saying some Nigerians are not guilty, not at all but the truth is, the faultiness of the management system of electricity supply to the public is madly in disorder.

Government should call for debt forgiveness, compensate the power providers and then ensure a proper billing system is instituted.

Q: NERC seems not to be interested in the customers, to what use is that agency?

A: NERC has proven to be grand failure. The regulatory body is meant to ensure sanity and efficiency in the power sector but how well have they performed? DisCos run amok in the temerity of raping Nigerians unchecked and NERC has been lame in taming the rascality they play on. This is unacceptable. How could a people be subjected to blind billing of having to pay for power not consumed and a government regulatory agency is within the space and helpless in protecting the them? It is grand failure and a disaster alien to sanity. NERC has failed Nigerians and should wake up to her responsibilities. I often ask myself, why are the staffs of NERC paid from the taxes and resources belonging to the people they fail to protect and possibly collaborating with their tormentors? How have they earned their being paid by government? This structured incompetence must be checkmated and it has to be now.

Q: What message do you have for Nigerians towards the protest you have planned?

A: Nigerians should be bold and courageous to confront oppression. We should not be intimidated to speak truth to power and rise to fight against injustice. Nigerians have been too docile for long over the cheat of Estimated Billing so bad that the rapists now consider it a right for them to rape us and we should consider the monstrous act as privilege. If the Nigerian people are resolute to say enough is enough to the rascality of DisCos, we would free ourselves from the slavery and oppression of the DisCos. I expect Nigerians to join me on Monday, September 28th by 9am at Allen Junction for the Protest Walk with consciousness to COVID19 safety measures.

Flood Destroys Over 300 Houses In Daura

VIOs Can Only Ask For Road Worthiness In Their Offices –...