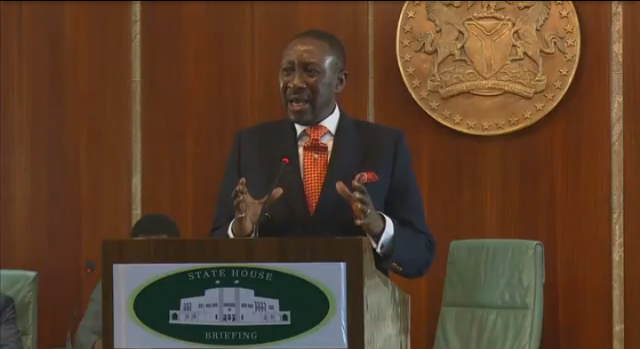 The National Security Adviser (NSA) Babagana Mongunu has disclosed that the armed forces killed at least 2,403 terrorists in the north east region if the country alone.

Those killed are mostly members of Boko Haram who have waged war against the country for more than a decade.

The NSA shed more light on a number of other issues when he addressed a press conference at the State Hous, Abuja on Thursday.

NSA: Securing the people and country is the primary responsibility of the government.

NSA: Between March and December 2020, the military successfully took out 2,403 insurgents in the North East.

NSA: When this Administration came to office, Improvised Explosive Devices (IEDs) were going off left,right & center. Within one year we were able to contain this situation—especially working to comprehensively deal with the root causes, like the illegal importation of fertilizer.

NSA: The recent changes made by Mr President to the security architecture give us a ray of hope that things will be adjusted, so that whatever we do as regards securing Nigeria will be in conformity with the aspirations of the people.

NSA: What to expect

NSA: These are not people looking for anything that is genuine or legitimate, they’re just out to take calculated measures to inflict pain and violence on innocent people. We must deal with them the way they need to be dealt with. We will fully assert the government’s will.

NSA: While government is not averse to talking with these entities, it also has to fully apply its weight. You can’t [negotiate] with people who are unreliable and who will continue to hurt society. We will apply the full weight of the government to deal with these criminals.

NSA: We are also focusing on the associated dimensions of the banditry and terrorism: Illegal Drugs, the flow of small arms & light weapons, and Illegal mining in places like Zamfara. These are some of the scenarios fueling the violence, & we are already tackling them decisively.

NSA – responding to a question: The President’s view & directive is that we will not engage mercenaries when we have our own people to deal with these problems. We have the personnel & resources, and the President has given a new lease of life to the Armed Forces.

NSA on external support: There’s a Regional Intelligence Fusion Unit, comprising US,UK,France working with us & our neighbors. They’ve been supporting us with intelligence. For us what’s most important is acting on the intelligence—that’s why we’re investing in equipment & assets.

‘They Are Using Their Connections To Avoid Refunding My Rent’ –...