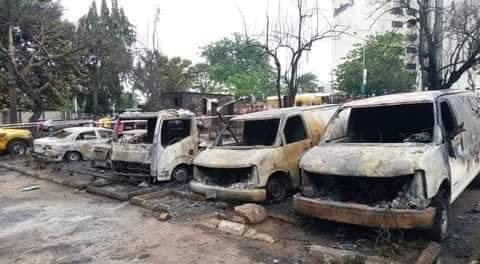 At least five persons confirmed to be Chinese nationals have died from the gas explosion which occured late Thursday night.

The incident which happened at Ogun State Property and Investment Corporation (OPIC) plaza which is on Mobolaji Bank Anthony way, Lagos is owned by the Ogun State government.

The Chinese were said be workers of a popular restaurant in the premises. Many others were injured and are still in hospital.

Also, part of the building was severly damaged by the inferno. At least 10 vehicles were burnt beyond repairs.

A statement by the.Ogun government through OPIC management expressed shock at the development.

A statement by the Special Adviser and Managing of Director of OPIC Abiodun Fari-Arole said, “from the available preliminary report, I understand that the fire was caused by a fuel tanker that exploded right in front of the Plaza and as a result several persons lost their lives while some persons were seriously injured and are receiving treatment. This is very unfortunate. Our sincere condolences to the families of the victims of this fire incident.

“I must commend the efforts of the fire service men who promptly responded when they were called upon last night. We also appreciate the efforts of security officials who did not allow hoodlums to take advantage of the incident.

“It is too early to speculate on the general impact of the incident. We shall therefore await the report of the investigation into this fire and thereafter take necessary steps.”