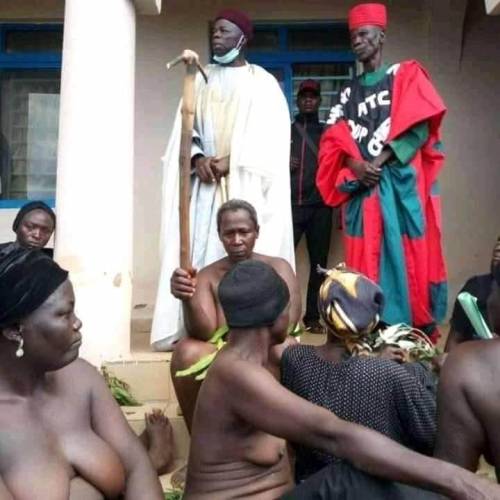 Women of Ninte village in Godogodo chiefdom, Kafanchan area of Jema’a Local Government Area of Kaduna State on Wednesday stormed the palace of the Chief of Godogodo half-naked to protests alleged incessant night killings by herdsmen.

The Ninte women, who were supported by others from surrounding villages who suffered same fate, arrived the palace in the wee hour demanding government’s prompt intervention over killings, rape, burning of houses by armed men suspected to be herdsmen which had been on the increase in recent times.

The PPRO who said maximum security personnel have been deployed in the affected area to put the situation under control, called on residents to help police curb crime by reporting suspicious movements to security agents.

However, a protester accused the state government of insensitivity alleging that it has refused to act since the incident started.

“Since May when these people started attacking our community to kill our sons and husbands, rape women and their daughters as well as set houses on fire, the government has abandoned us to our fate. As it stands now, the area is no longer safe for us.

“Government we voted into power has left us at the mercy of armed herdsmen; farms cannot be cultivated in the face of a high level of impunity. Government is saying we need to go back to farm to help the country move forward.
But how can one go to farm when you don’t know whether someone is already laying ambush? she asked.

Chief of Godogodo Iliya Ajiya however, appealled to the protesting women to remain calm, saying everything possible was being done to bring the situation under control.
The sole administrator of the council, Dr Bege Katukah confirmed the development, adding that security men had been mobilized to the affected community to restore peace and order.

Residents of the affected villages have begun moving to neighbouring Godogodo, Antang and Gidan Waya for refugee.

North-West Can Be Likened To Afghanistan, Says El-Rufai