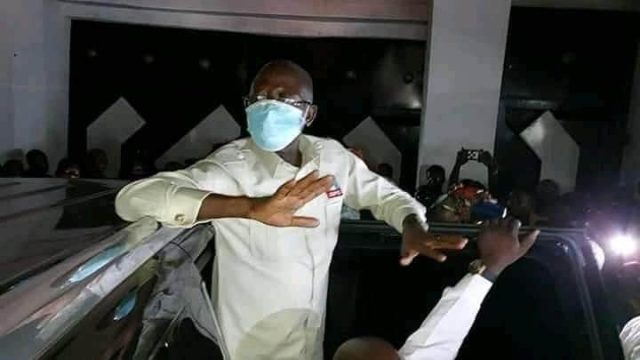 Former National Chairman of the All Progressives Congress (APC) Adams Oshiomhole has said he is sorry for helping to elect Godwin Obaseki (although he did not mention his name in person) governor of Edo State.

He said this when he returned to the state to as he put it “join the people to reclaim the state APC.”

Oshiomhole, a former governor of the state spoke at the weekend in his home at Iyamho, near Auchi in Etsako West Local Government while addressing his supporters, who welcomed him from Abuja weeks after the national working committee of his party which he headed was dissolved.

The enthusiastic crowd waited for Oshiomhole for many hours at the main gate of Auchi Polytechnic, before later moving to Iyamho, for the special address by the ex-national chairman of the APC.

Oshiomhole said: “I am back and ready for the job. The snake that entered our family home, God has driven the snake to where he belongs. I have come home to join you and start the process of reclaiming the house to the family of APC.

“I have only one mission and I know it is our common mission, which is to bring Edo back to the path of sustainable development.

The former Edo governor said when he became the governor in the state, he was not the national chairman of any party, adding that he had also left the presidency of the Nigeria Labour Congress (NLC).

Oshiomhole also apologised to the people for supporting Obaseki in 2016 to become governor.

He said: “I made a mistake by supporting a man (Obaseki), who has no vision for my people.

“So, I want to correct my mistakes by making sure a servant of God, Pastor Osagie Ize-Iyamu, is elected as governor on September 19 and to kick the snake out of Government House, Benin. From now till September 19, I am here in Edo State, because a political lion that I am, I am not scared of anything.

“The man (Ize-Iyamu) that is coming is not a stranger. He campaigned for me in 2012 and I won in the 18 local governments. He knows the roots, unlike the current governor who just became governor and does not know the efforts people made to make him governor. We will kick out the MoU governor and replace him with a pastor who will sweep out the Coronavirus party (PDP), by the grace of God.”

He stated that the negative things he said in 2016 about Ize-Iyamu, then in the PDP, were part of playing politics.

Nigerian Parents And The Culture Of Dependency

FCMB: We Posted N574 Million Into Magu-Pastor’s Account In Error