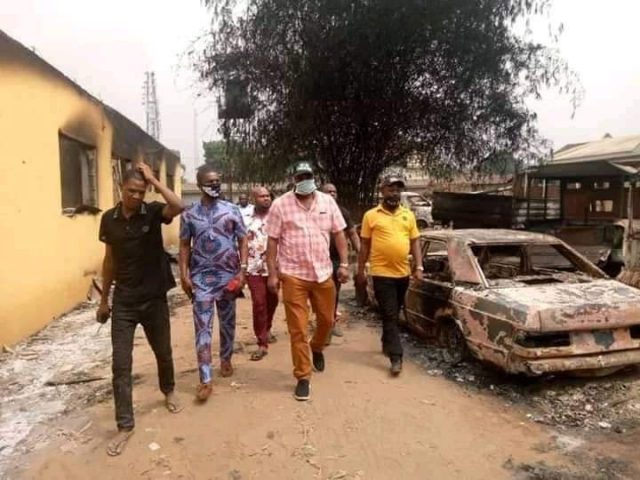 Inspector General of Police Mohammed Adamu’s committee established to unravel recent attacks on the police in the South East will submit it’s report on Monday (today).

The IGP had set up a committee of experts to look into the increasing cases of attacks on police formations particularly in that part of the country and proffer solutions to the ugly trend.

In February, gunmen attacked the Obowo Divisional Police Headquarters located at Umulowe community in Imo and killed two officers on duty. In neighbouring Abia a police station in Aba (pictured above) was similarly attacked.

The same month, hoodlums laid siege to Aboh Mbaise Divisional Police Headquarters in the same state and set it ablaze.

Worried by the ugly development, Adamu had to set up a committee of senior police officers to look into the matter, a source disclosed.

The source said members of the committee had since completed their assignment and were due to present their report at a meeting of the police management team scheduled to hold at the Force headquarters on Monday.

He expressed the assurance that once the report was presented and adopted, Nigerians would begin to notice massive police operation in the South-East.

Ahead of the presentation of the report, however, the source added that some arrests had been made concerning the past attacks.

The senior police officer said, “Honestly, these attacks on police formations, especially in the South East are giving us, and particularly the IGP, a lot of concerns.

“To address it, IGP recently set up a high-powered committee of police experts from the intelligence, operations and tactical arms of the force.

“I am aware that members of the committee have completed their assignment. They are due to present their report at the police management meeting holding tomorrow (today).

“I am very certain that once the report is presented, adopted and implementation starts, you will begin to witness massive police operations in the South-East that will lead to recovery of arms and restoration of normalcy.”

The source said many of the weapons that were taken away by hoodlums during previous attacks had been recovered.

He added, “I can assure you that even up until the early hours of this (Sunday) morning, arrests are being made in respect of the recent attacks and a lot of weapons are being recovered.

“I am sure you still remember the recent joint operation in the Orlu axis; that was the beginning of the massive operations that led to the arrests and recoveries. There are ongoing follow-up operations in the zone.”

When contacted on the telephone, the Force Public Relations Officer, Frank Mba, said the IG was committed to tackling the security challenge headlong.

Mba, a Commissioner of Police, recalled that the police boss had recently asked a Deputy Inspector-General of Police in charge of South-East, Joseph Egbinike, to move to the zone with a view to addressing the challenge.

The police spokesman, “The IGP was clear in his directive to the DIG. He was asked to visit all the states in the South-East.

“The purpose is for him to have a first-hand assessment of the situation. He is also expected to motivate the policemen in the zone and galvanise supports from state and local governments as well as other stakeholders.

“The DIG is also expected to galvanise local intelligence in order to ward off further attacks on police formations.”

South-East To Be On Lockdown Every Monday From August 9, Says IPOB

The Impact Of Financial Autonomy For Local Government Development In Nigeria