MENUMENU
Home PAST & PRESENT FOR THE RECORDS June 12: ‘I Am Not A Deserter’ – Abiola’s Letter To Gani...
Facebook
Twitter
WhatsApp
Linkedin
Email
Telegram 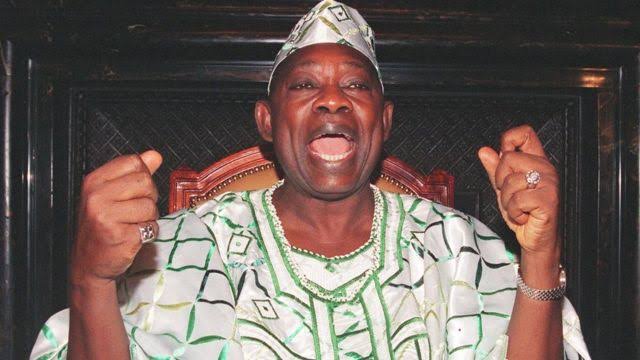 Letter written on July 5, 1998 in prison and given to his daughter Lola Edewor and wide Bisi Abiola during their visit with Abiola two days before he died.

I am not a deserter

Praise be to God for your life and the courage, fortitude and determination with which He endowed you. May we live long to be of service to each other in the contribution we make to the development, peace and justice/fairplay in Nigeria and beyond. The “Express” story is a hoax. True, both Anan and Anyaoku (apparently working together, although I saw them separately), wanted me to sign a statement that I will not, once again, demand my mandate, once released. They both believed such undertaking would expedite my release.

To each of them, my answers were:
(1) Having been cut off from all media and human contacts for 4 years, I was like a man put in an open grave. I quoted Rt. Hon. Harold Wilson’s statement made in Glasgow on 2nd October, 1964, a few days before his first Labour victory in 13 years:
“24hrs is a long time in politics.”

If 24hrs is a long time, 4 years cut off from politics can be likened to eternity. Diplomats can guess: political leaders must be sure because credibility once lost can never be regained.

(2) Both diplomats spoke of arranging my UNCONDITIONAL release. With the demand for that kind of statement that will render me a “deserter”. Any release obtained on that basis would be the worst form of capitulation.

(3) The declaration of 11/06/94 was made at a major public rally to thousands of cheering supporters. A statement under the table of AGUDA House purportedly negating it will not be acceptable as authentic. My rejection will naturally read “duress” into it. Judged by the circumstances (therefore) it will not be worth the paper on which it was written. A declaration made publicly (at a major rally) and clear ( in the most unambiguous terms) at any similar rally. You cannot render a man naked at the marketplace and prefer to dress him up in the bedroom!

(4) That a declaration, like that of 11/06/94, once made and in great circulation, needs no repetition, which, will be superfluous. Made when June 12 was suffering from a terminal illness – in-fact in a COMA – the June 11 shot-in-the-arm had over the years not only revived the patient (June 12) but has also established it firmly on its own base, such that its right to exist would today no longer be denied.

In this situation, I could well concentrate on my release, on revamping my health, attending to the wedding of 4 or 5 of my children, re-establish the cohesion of my family, which has been almost totally eroded, especially after the brutal assassination of my Kudi whilst my leading supporters who have done wonders in my absence, take the full steps necessary for formal VICTORY by grace.

It is this point (4) that have might been twisted or misunderstood by Annan and /or the section of the press who got it wrong.

(5) Finally, I reviewed the history of June 12.
I told them that quite at the beginning, Obasanjo in July 1994 came to me with 26 traditional rulers to seek a similar statement. He was told off in no uncertain terms in the presence of the retinue of traditional fathers, after I had explained that the issue is one of God Vs a few “powerful elements”. The voice of the people is the voice of God, ” Vox Populi Vox Dei” , a popular maxim long before Jesus Christ arrived.

I told them that IBB’s only reason for cancelling the free, fair and peaceful poll – a fact he could not deny – was that his leading officers (who would have been retired with him) threatened to kill him and to kill me if he ever swore me in. I did not allow him to use the Koran to swear to “blackmail”. IBB made the assertion to two Northern Emirs – mutual friends of the two of us and Chief Sonekan at a peace meeting called at the presidential wing of the ABUJA airport. I would not accept the cancellation on that ground or any ground hence my ” hijra” of August 2 to mount worldwide campaign, as the local press had then been silenced. I said that if I had accepted what was done, it would have created a most dangerous precedent, not only for Nigeria but most of the third world. The saying would then have been – “who are you to resist what could be forced on Abiola?”. The ultimate effect is that Nigeria would then become a land of “guided democracy”, of the type in the imagination of the late President Sukarno of Indonesia who used to issue ” voting directives” to his nation of 230 million. God forbid bad thing!

The lapse of five years since the election of 12/06/93 was regarded as fatal to the mandate. Both diplomats told me nobody will recognise me on the basis of the out-of-date mandate. Chief Anyaoku went on further to say he had sought and obtained legal opinion which confirmed the “death of the mandate”.

My reply:
Firstly, there’s no statue of limitation on valid elections, provided the winner did not willfully refuse to take office. The struggle in Sierra Leone more than three decades ago between Milton Margai and Siaka Stevens is a case in point. The Haiti issue re-Aristide is partially relevant.

Secondly, if that were so, then, criminals would have had a lawful right to take advantage of the criminal situation they have created! That, in my opinion, is against equity and the rule of law and, therefore, invalid. They illegally cancelled the election (which they had no power to do) and promoted their usurpation by putting in the most wicked incarceration ever known – 4 years without exercise, access to the sun or even the corridor outside my room.

Thirdly, no nation ever solves her nagging political problems through legal opinion. The Bar of public opinion has a code of practice totally different to that of a formed point of law. I asked Chief Anyaoku what was his interest in seeking the so-called legal opinion? I got no answer because by that time the exchange had become eyeball to eyeball. He looked most embarrassed and dumbfounded. Annan must know that if the majority of OAU member nations gave me recognition, the UN must automatically do the same e.g. the Angola situation between MPLA and UNITA.

The call for the recognition in the London Times of last Friday has taken the wind out of the sail of the “five leg” argument. There was no substance to it.

My final point is that although Time searches out and destroys all things MATERIAL, a point made most convincingly by Shakespeare in his sonnets 5, 12 and 64, his emphasis on “never resting time” and the Spencer in “of time and the River” where he stated that “dark times remind us of the briefness of our days”. TRUTH, which is what June 12 is, is SPIRITUAL – AL-HAQQU in Islam – one of the sacred names of God. Therefore, since all things in nature, life and creation are subservient to God(K2:116) willingly or unwillingly, TIME IS IN FACT AND INDEED ON THE SIDE OF TRUTH, K17:81, K34:49, K2:42 etc. and Gospel according to St. John 8:32, Psalm 62:1-2, Isaiah 40:30-31 etc.

It is falsehood, with its associated varieties and crookedness that must varnish as foam on the ” Torrent of time”.

The FMG, probably did not want to meet me at this stage. Hence, the arrangement made for the two to meet me.

The very top meeting I had on Monday night with two of our service chiefs was to inform me about the death of General Abacha and my friend Ya’Adua and talk generally. The atmosphere was most cordial and the service chiefs were most sympathetic. It enabled me to asses the quality and calibre of the two which are most high, indeed. I have gone into this minute detail because I heard you were upset when you read the exclusive report. probably did not know me well enough! If I refused to listen to IBB, my personal friend of long standing, and ignored Abacha, will it be 2 international civil servants who would force my surrender? Please, have more confidence than that in the future.

All my life I had worked for the result which God in His mercies, gave us on June 12, 1993. Quoting Jesus Christ (Luke 9) “No man having put his hand to the plough, and looking back, is fit for the kingdom of God”. The spiritual consequence of any desertion of a sacred cause like June 12 is HELL, which God forbids.

ANOTHER DIFFERENT POINT – on 13/1/95, Abacha sent Prince Ajibola to me to say he (Abacha) would not allow me to get any trial because he knew I had large sum of money abroad to my recognition which will force him out of office. I asked Prince what he advised. He said ” Patience” – Suru ni. I told him to tell my family and lawyers.

Remember me to the family with best personal regards.

Election Petition: Atiku Insists, Buhari Not Qualified To Contest Election, Has No Certificate