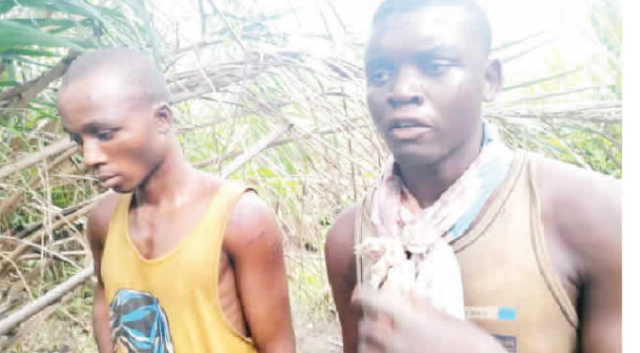 The Benue State Police command has uncovered mass graves in the Katsina-Ala Local Government Area of the state.

The discovery was made possible following the arrest of two of the eight kidnap gang members arrested in Osun State last week.

Earlier, the Osun State Police Command had last Saturday arrested eight members of a gang, who are from Benue State. They were picked up in the Omo Ijesa area of the state.

The spokesperson for the Osun State Police Command, Yemisi Opalola, had explained in a statement on Saturday that the eight-member kidnap gang abducted one Catherine Akiishi and relocated to the state to negotiate the ransom for her and added that the suspects would be handed over to the Benue State Police Command.

Two of the suspects, Aondoaseer Terseer, aka Bob Tsetse, 23, and Orkashima David, aka Cash Money, on Monday led a team of detectives to the shallow graves, where their victims were buried in order to conceal their nefarious activities.

The suspects claimed to have been working for one Azonto, a militia and the late Gana’s second-in-command and were responsible for several kidnappings and killing of security agents.

Three male and three female decomposing bodies were recovered in the shallow graves, with two of the females killed in January and April identified as wives of two of the suspects.

The victims were identified as John Nyitamen, Catherine Akiishi, Aondoverb Fidelis as well as wives of two of the suspects.

The suspects were said to have confessed to killing their wives, with Tertse allegedly saying his wife died when a piece of wood he threw at her pierced her neck following a misunderstanding.

David said his wife’s death was instigated by his father after he accused her of trying to set him up by calling security agents.

According to him, through the help of his two other gang members, the wife was killed and her remains buried in a shallow grave.

The suspects gave the names of their other gang members as Umangu Ihuman, aka Aka; Agwe, aka Banga; Aondover Ihom, aka D’ver; Luper; and Yaryon, aka Snake, adding that four of them had been killed by security agents.

The state Police Public Relations Officer, DSP Catherine Anene, who confirmed the discovery, said she was still expecting details of the operation carried out by her colleagues in Katsina-Ala.

“Yes, I can confirm the report, but am still waiting for the details,” Anene said.

Kwara To Float Own TraderMoni