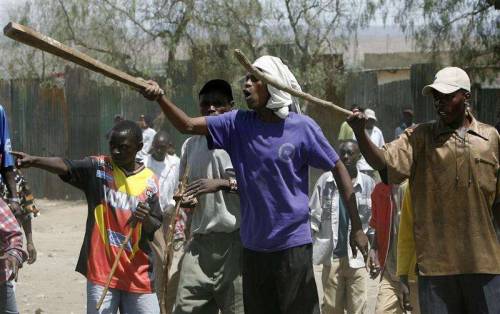 Sir, It’s gradually getting out of control. The country is no longer at ease as blood keeps gushing out of every nook and cranny of the country. If not Boko Haram today, it’ll be herdsmen clash tomorrow. Kidnappers are orchestrating their operation carry for ransom. And genocide like killings is becoming increasingly intractable in some parts of the country. It drags tears out of one’s eyes. Should we continue like this?

Such is bound to occur in a country where billions of naira go into extinction without a reasonable account of how the monies are spent. While the society battles the bloodletting from people who hide beneath the bush, the ‘constituted thieves’ are dragging the country’s economy into the mud by carting away monies meant for developmental projects. Shame! But never mind. No one will question them since the monies are used to ‘take care of themselves.’

Indisputably, it’s as if the president who came on board on the template of fighting insecurity and corruption is not doing anything to bring an end to the mindless and gruesome killings as well as gross misapplication of funds.

Seven days back, an online newspaper reported that no fewer than 38 persons were killed on Monday night in separate attacks on two villages in Sanga Local Government Area of Kaduna state. “21 people were killed in Fadan Kashi while 17 killed in Nandu,” according to the council chairman. July 20, another wave of violence broke out which left 14 people killed and an unknown number of sustained different degrees of injury.

Gunmen suspected to be Fulani militia on July 25, reportedly invaded Agwala Magayaki of Doka Avong in Kajuru Local Government Area of Kaduna State, killing seven persons, including an 85-year-old man. Some locals were declared missing. During the attack, houses were razed to ashes.

The massacres in Kaduna has been tagged with religion and ethnic coloration. It doesn’t depict the real definition of the happenings in the state. The killing isn’t limited to a particular religion or ethnic group. Muslims are being killed so as Christians. As such, we should all come together to stamp out the rampant killings in the country. Terrorism has no religion or ethnicity. Take it or deal with it.

It’s so bad that earlier in the week, unknown gunmen invaded Agbudu community in Kogi-Koton-Karfe Local Government Area of Kogi State, killing 14 persons and injuring six. Out of the 14 people killed, 13 were from the same family!

Enough of excuses. The killings can’t be stopped by press releases or commiserations with the affected families. We can’t wait till ‘fortitude to bear the loss’ letter gets to everyone before drastic actions are taken to avert continuous killings in the country. If we continue to fold our hands when we’re to act, things will get from bad to worse. The president needs to halt the killings if he wants to save his campaign of fighting insecurity from subjecting it to object of mockery.

I will urge Mr. President to ‘calm down’ and strategize with the service chiefs on how to stop the killings.

Back On The Beat, After Defeating COVID19 – Lagos Gov’s Press Secretary Shares Experience