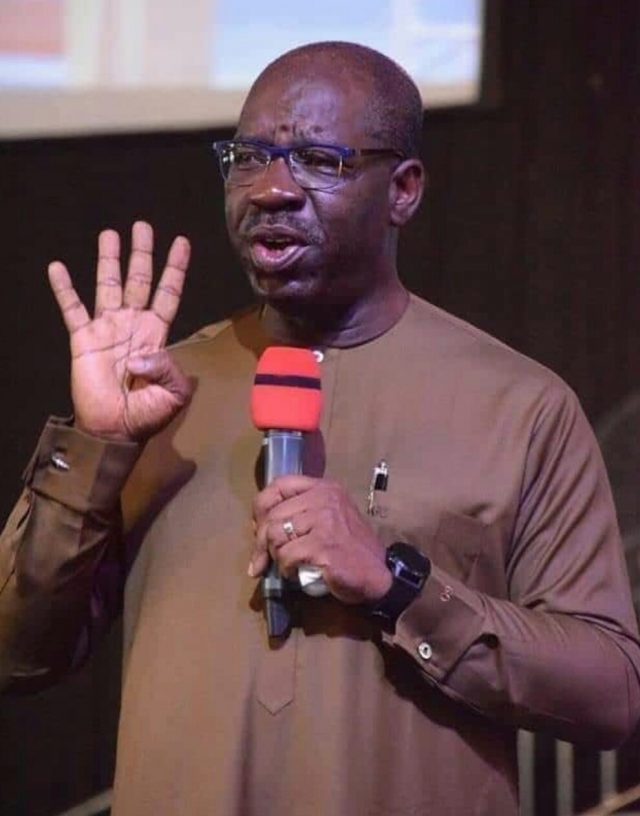 Edo State Governor Godwin Obaseki has said his opponents have paid the police to come into the state and intimidate his supporters as the September governorship election draws nearer.

He also accused the leadership of the All Progressives Congress (APC) in the state of plotting violence and importing arms to harm his supporters.

The governor said this while receiving Muslim leaders at the Government House, in Benin City.

Obaseki, who is running on the platform of the Peoples Democratic Party (PDP) expressed his readiness to stand with the people, defend their interests, and develop the state.

He said, “I am not afraid of any man but God. I know the gang up is to provoke me and my supporters but we will not fall for their tricks as God will help us.

“As I speak to you now, you can’t imagine that Police from Abuja are already in the state and have been paid to arrest our supporters. They have been paid by a billionaire to arrest Peoples Democratic Party supporters in the state. This billionaire sponsored the attacks on me and other PDP governors at the Palace. This is to tell you the level of corruption and impunity we face.

“They are planning violence, bringing arms, intimidating our supporters as part of their strategy. They know that if we have a free and fair election, they stand no chance. Their strategy is to continue with their propaganda and lies. They know they don’t have a record of performance; their plan is just to intimidate our supporters and ensure they stay off the polling booth.

“They attacked my supporters and wanted me to react to the attacks. I will not attack them back because as the Chief Security Officer of the state, my responsibility is to maintain peace. We would continue to do that at all costs.”

Mayaki said, “Governor Godwin Obaseki is a confused man merely projecting the criminal plans his divided party, the PDP, are perfecting following the dawning realisation that they have been rejected by the people of Edo State.

“The APC is the only party campaigning on its documented manifesto because our sole strategy to win the election is by winning the hearts and goodwill of our people through well-thought-out programs and policies that will bring relief and erase the failures of the past four years.

“He is also trying to deflect attention while himself and his party, already renowned for violence, continue to ferry thugs and cultists into the State to rig the election. But he will be resisted. Together with our people, we are going to keep watch and ensure the votes to return Obaseki to where he came from are protected and made to count.”

I Won’t Go To Tribunal, But Pre-Election Cases Will Go Ahead, Says Ize-Iyamu

Researchers: Pineapple Could Help In Management Of Coronavirus