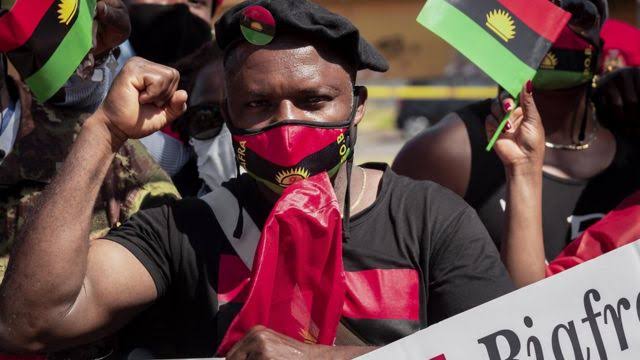 The apex Igbo socio-political organisation, Ohaneze Ndigbo Worldwide, on Monday, called on the proscribed Indigenous People of Biafra (IPOB) and other secessionist agitators in the South-East region to stop all forms of “anarchy” in the land and explore dialogue.

The President-General of Ohanaeza Ndigbo, George Obiozor, on the occasion of the annual celebration of Igbo Day, appealed for a return to normalcy in Igboland.

According to him, IPOB leaders should take note of the danger violence has posed in Igboland, adding that the South-East geopolitical zone “must avoid being a race that has voluntarily chosen to perish in violence and insecurity”.

Prof Obiozor said what is happening in Igboland today — Imo, Anambra, Enugu, Abia and Ebonyi States — is not liberation but destruction and devastation.

“Our youths particularly the leaders of IPOB, should take notice of the danger violence has posed in Igbo land,” he said, adding that Ndigbo “must avoid being a race that has voluntarily chosen to perish in violence and insecurity, and we must stop threatening ourselves and there must be a stop to violence and violence rhetoric. Something other than the initial objectives of IPOB is taking place and it is dangerous.”

“Today, what we are seeing in Igbo land is not liberation but Ala Igbo destruction and devastation. It is a national tragedy for Igbos. The liberty and freedom of Ndigbo are threatened internally and externally. I call on IPOB leaders to reassert the authority and control of the organization,” the Ohanaeza President-General said.

He said, “We repeat our preference for dialogue instead of violence or military solutions to national problems. The dialogue should not be delayed further.

“For Ndigbo, the demand is simple, that the Nigerian Federation should be sustained and have a sense of stability; it must be a union of equals and the composite units must have the ability to survive without begging the centre.

“We must tell ourselves the truth or keep deceiving ourselves by ignoring the calls for decentralization and devolution of power in Nigeria. Ironically, in history, societies where truth comes last, tragedy comes first. We must learn the lessons of history, particularly our own Nigerian history on how the story began. Nigeria must avoid being a failed state.”

IPOB had pronounced a number of sit-at-home orders in the South-East since the beginning of August, threatening violence and demanding the release of its embattled leader, Nnamdi Kanu, who has been in the custody of the Department of State Services since June 2021, and is in court for terrorism-related charges.

Many deaths and other casualties have been recorded during the sit-at-home days which have paralysed economic activities in the region in the last eight weeks.

Also, scores of police stations, offices of the Independent National Electoral Commission, amongst other government facilities have been razed by hoodlums suspected to be IPOB members in the last few months.

EXCLUSIVE: How Kalu’s Slok, Others Litter Abia With Abandoned Projects After...