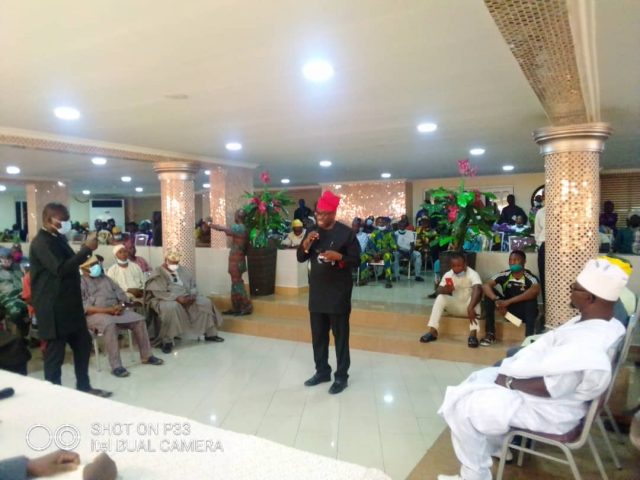 As part of its ongoing efforts at reconciling aggrieved members of the Peoples Democratic Party (PDP) in Ogun State, the former Governor of Osun State, Olagunsoye Oyinlola, on Wednesday led the South West PDP Reconciliation Committee to a meeting with stakeholders of the party in Abeokuta, the state capital.

Other members of the committee are the former Deputy Governor of Lagos State, Mrs Koforola Bucknor-Akerele; former Nigerian High Commissioner to Uganda Omolade Oluwateru; foremost physician turned politician, Dr Saka Balogun and
Monsuru Kukoyi who is the secretary of the panel.

The stakeholders, who were drawn from the three senatorial districts, commended the initiative of the Oyinlola-led Reconciliation Committee.

They urged the committee to do its job justly and without fear or favour.

All those who spoke at the meeting appealed to the committee to prevail on the national leadership of the party to stop taking sides in intra-party disputes. Rather, they should make efforts to resolve them as “the father of all”.

They also urged the committee to intervene on the issue of the illegal occupation of the party secretariat by some dissidents whom they said had signed a three-year agreement with the Allied People’s Movement (APM).

One after the other, the speakers said it was imperative for the two-term governor produced by the PDP in Ogun State, Otunba Gbenga Daniel, to step up and take over the leadership of the party in the state and return it to winning ways.

It would be recalled that the committee had interacted with Daniel and some selected leaders of the party on Tuesday ahead of today’s meeting.

They also declared their support for Oyo State Governor, Engr. Seyi Makinde, as the leader of the party in the zone.

“We express our unflinching support for the leadership of the PDP in the South West by His Excellency, Governor Seyi Makinde. It has always been the tradition that sitting governors lead the party, especially when you have only one governor as it was in the immediate past,” they said.

Responding, Oyinlola assured the leaders and members of the party that the committee had dutifully noted their submissions and will do everything within its powers to bring about peace in South West PDP.

Court Upholds Deregistration Of AUN As Political Party By INEC