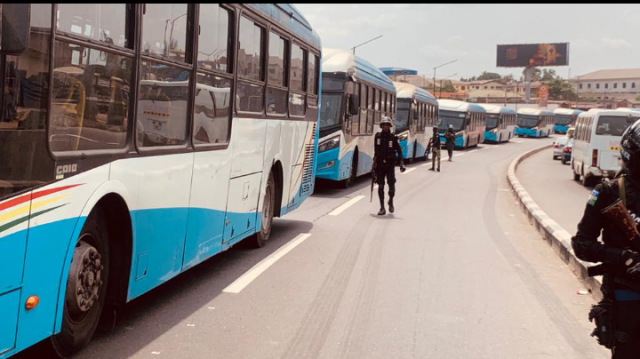 The Commissioner of Police, Lagos State, Hakeem Odumosu has condmened the lawlessness that trailed the death of an Okada rider on the Lagos- Abeokuta expressway on Wednesday.

Odumosu had ordered operatives of the Lagos State Rapid Response Squad (RRS) to contain the crisis that was brewing which they successfully did by preventing further reprisal attacks on twenty two BRT buses and robbery of passengers caught in the fracas.

Trouble began after an accident involving a BRT Bus and one motorcyclist. The accident occurred at Cement Bus-Stop along the road. The bike was riding illegally on the BRT corridor, Politicos gathered. The commercial motorcyclist, who lost control while using the corridor, was crushed to death by an oncoming BRT bus which resulted to attacks by some motorcyclists and miscreants on all BRT buses and passengers in the area.

The RRS enforcement team was able to restore order and escorted the 22 BRT buses safely back to Oshodi terminal, according to a statement by police spokesperson Muyiwa Adejobi.

The Commissioner of Police decried the flagrant disobedience of traffic rules by Okada Riders and motorists in the state especially plying the BRT corridors with impunity. He emphasised that such is unacceptable.

The police boss however directed that the hoodlums that orchestrated the attacks on BRT buses and brouhaha at cement area in Wednesday 10th March, 2021, be apprehended and made to face the wrath of the law as the command will not tolerate any act of lawlessness in any part of the state.

Okoi Obono-Obla- Another Case Of Killing Our Prophets?