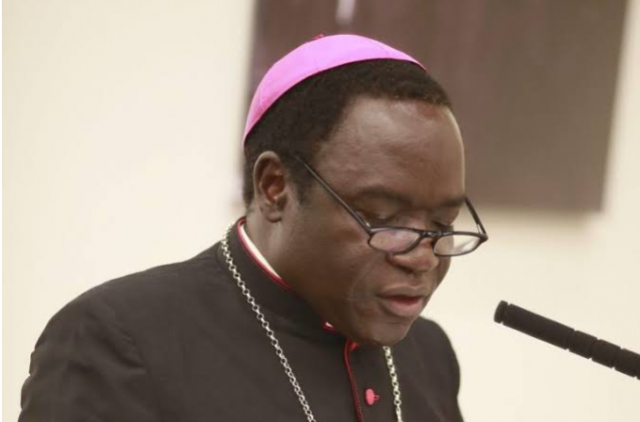 The Presidency has condemned the call on the Bishop of Sokoto Diocese, Most Rev Matthew Kukah, to leave Sokoto State as unconstitutional and a violation of the priest’s rights.

A group known as the Muslim Solidarity Forum had during a press briefing on Tuesday demanded that Bishop Kukah tender an apology to the Muslim Ummah for alleged ‘malicious comments’ against Islam or quietly leave Sokoto.

Bishop Kukah had recently come under attacks from various groups, mostly Islamic, after the release of Christmas message, which devoted itself to a scathing criticism of the Muhammadu Buhari-led administration, some of which contents had been deemed to have insinuated religious bias against the President.

However, on Wednesday a statement by Senior Special Assistant to the President on Media and Publicity Garba Shehu, the Presidency said the demands by the group were wrong and opposed to the dictates of the Constitution of the country.

According to the statement, they remain the constitutional rights of all Nigerians, including Bishop Kukah, to reside in any part of the country, own property as well as speak and express himself freely, adding that the nation’s diversity is her strength as a nation.

“The reported ultimatum by a group based in Sokoto, ‘Muslim Solidarity Forum’, calling on the Bishop of Sokoto Diocese, Most Rev Matthew Hassan Kukah, to tender an unreserved apology to the entire Muslim Ummah over his recent ‘malicious comments’ against Islam, or quietly and quickly leave the state, is wrong because it is not in line with the Constitution of the Federal Republic of Nigeria.

“Under our Constitution, every citizen has the right to, among others, freedom of speech and expression, the right to own property and reside in any part of the country, and the right to move freely without any inhibitions.

“Nigeria’s strength lies in its diversity. The right for all religions to co-exist is enshrined in this country’s Constitution. The duty of the government, more so, this democratic government, is to ensure that the Constitution is respected. But all must respect the rights and sensitivities of their fellow Nigerians,” it said.

It, however noted that Bishop Kukah had offended many Nigerians by his controversial comments against the government, as well as against President Buhari, in person, and advised him to be mindful of his comments at all times, considering the sort of reaction it might draw from different people.

“Father Kukah has greatly offended many with his controversial remarks against the government and the person of the President, with some even accusing him of voicing anti-Islamic rhetoric.

“On matters such as these, responsible leadership in any society must exercise restraint. Knee-jerk reactions will not only cause the fraying of enduring relationships, but also the evisceration of peaceful communities such as Sokoto, the headquarters of the Muslim community, as beacon of pluralism and tolerance.

“The Sultanate has historically had good relations with followers of all faiths. That is why Father Kukah was received on his arrival in Sokoto with friendship and tolerance.

“Under our laws, groups or factions must not give quit notices, neither should they unilaterally sanction any perceived breaches. Where they occur, it is the courts of law that should adjudicate. Unilateral action is not the way to go.

“Groups such as the Muslim Solidarity Forum must be seen to share and uphold the country’s multi-religious principles. And individuals like Father Kukah must respect the feelings of his fellow Nigerians in his private and public utterances,” the statement said.

No Forex For Food Importers – Buhari, Vows To Tackle Food Inflation In 2021