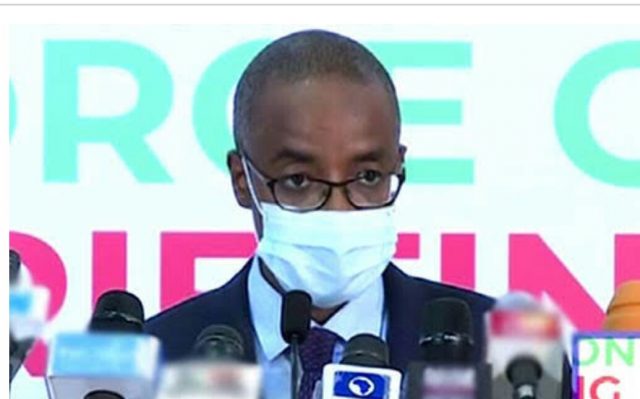 The Presidential Task Force (PTF) on COVID19 says some international flight passengers who presented negative COVID19 results tested positive for the virus on arrival in Nigeria.

National Coordinator of the PTF Dr. Sani Aliyu disclosed this on Tuesday while appearing before a joint senate committee on health and aviation.

Appearing alongside Minister of Health Dr. Osagie Ehanire, Aliyu said there was an instance in which 40 percent of passengers on a single flight tested positive for COVID19, despite presenting negative COVID19 results prior to boarding.

Chairman, senate committee on health, Dr. Ibrahim Oloriegbe during the meeting expressed concern about the protocols for international flight operations in relation to COVID19 test requirements.

“The issue is about the protocols that have been set up for testing of passengers, either intending to fly out of Nigeria or coming into Nigeria, and the challenges associated with it,” Oloriegbe said.

In his response, Aliyu said the protocols were necessary in order to limit the possibility of importing more COVID19 positive cases into the country as a result of past experience.

“When we started with the evacuation flights and special flights, the arrangement then was that people coming into the country will need to have negative COVID19 test PCR results, which have to be valid at the time — the seven days,” he said.

“There were situations from specific countries where we had up to 40 percent of the passengers on a single flight coming in with the negative COVID19 PCR result and subsequently being tested and found to be positive.”

Aliyu, who explained that there the need to avoid such situations, said the PTF held meetings with ambassadors of the affected countries which had issued negative COVID19 results to persons flying into Nigeria, who turned out to be positive, in order to determine what could have gone wrong.

He added that as part of efforts to address the challenges, the validity period has now been reduced to four days before such passengers are due for arrival in the country.

Mailafia Is Desperate To Breach Peace In The Country – DSS

Mali Protests Resume As Thousands Call For President To Resign

‘It’s Satanic, Will Snuff Life Out Of Church’ – CAN Rejects...