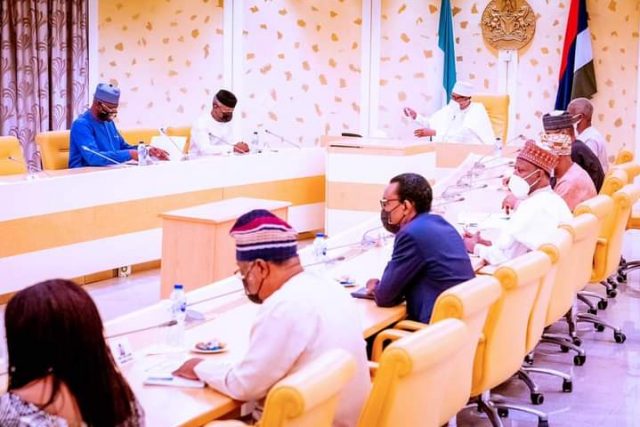 The Presidential Economic Advisory Council (PEAC) has asked, President Muhammadu Buhari, to remove subsidy on petrol and adopt a pricing regime that reflects the cost of the commodity.

Buhari had in 2019 set up the council chaired by Prof Doyin Salami to replace the administration’s defunct Economic Management Team led by Vice President Yemi Osinbajo.

The council, charged with the responsibility of advising the President on economic policy matters including fiscal analysis, economic growth and a range of internal and global economic issues working with the relevant cabinet members and heads of monetary and fiscal agencies, reports directly to Buhari.

Its advice that petrol subsidy be removed formed part of its presentation at its sixth regular meeting with the President last Friday, when it also warned that the subsidy regime would worsen solvency of state governments.

According to the document presented at the meeting, the council drew Buhari’s attention to three issues that it said required urgent attention.

They include the need for policy clarity with regard to fuel subsidies which it said would help resolve the dilemma which rising crude oil prices present; the worsening security environment which it said had adversely affected food production leading to higher prices; and the need for the Petroleum Industry Bill to encourage investment in Nigeria’s oil and gas sector.

The council noted that improving crude oil prices had led to what it called the Nigerian ‘dilemma.’

The dilemma, it said, resulted from the conflicting implications of higher crude oil prices on the nation’s economy.

According to the council, rising crude oil prices improve public sector revenue and reserves of foreign currency while higher crude oil prices mean that the cost of imported petrol should be higher than the ₦167/litre being paid at filling stations.

It noted that the restoration of subsidies created a set of significant problems. It added that as there was no provision for subsidy payments in the 2021 budget, such payments would have to be done by the Nigerian National Petroleum Corporation (NNPC) thereby further reducing revenues accruing to the Federation Account.

This situation, it said, was capable of worsening the solvency of many state governments and could take the country back to 2015 when the Federal Government had to provide ‘bailout’ funding to the states.

The council stated, “As there is no provision for subsidy payments in the 2021 budget, such payments will have to be done by the NNPC thereby further reducing revenues accruing to the Federation Account.

“The solvency of many state governments will worsen – this could take us back to 2015 when the Federal Government had to provide ‘bailout’ funding to the states.”

The Salami-led group added that restoration of subsidy made investment in Nigeria’s downstream oil sector unattractive.

The document read, “Council advises as follows: there is an urgent need for clarity and consistency in petrol pricing policy.

“Subsidy on petrol be removed and a pricing regime which reflects the cost of petrol adopted.

“It is noteworthy that with the exception of petrol, the prices of all other petroleum products have been deregulated; the cost of retaining the subsidy outweighs the benefits, or that the benefits of removing the subsidy are far greater than the costs.

“Data published by the National Bureau of Statistics also show that petrol prices are not the same across Nigeria.

“In March 2021, petrol prices range between ₦162.17 and ₦200.87/litre –the highest being in Lagos State whilst the lowest prices are obtained in Adamawa State.

“Council is especially concerned that in addition to further worsening government revenue, re-introduction of subsidies will jeopardise investment in the oil sector and also create uncertainty about general government policy on pricing.”

On security, the council noted that there was a consensus on the worsening of the security situation in Nigeria.

The council noted that violence had had impact on human capital and on poverty and vulnerability while physical capital and infrastructure are often damaged; while business and investment suffer.

On the way out, the council advised the FG to among others, “Defeat Boko Haram decisively, as a decisive defeat is necessary to permanently keep the insurgency at bay.

“There is need to review strategy as to the way forward, examining all options -including seeking the assistance of external powers.

“Improve the implementation of policies aimed at improving access and quality of education in underserved areas.

“Implement existing law on compulsory attendance of primary school to reduce the number of out of school children, a key recruiting ground for thugs.

“Resolve grievances around exclusion from access to power, opportunity, and representation through dialogue.

“To be effective, government should involve civil society, the private sector, regional and international organisations focused on peace and conflict resolution in roundtable discussions aimed at resolution of grievances.”

On the PIB, the council noted the progress of the bill through the National Assembly.

It said, “The importance of this bill to the national economy cannot be overstated.

“When enacted, this law will have a profound effect beyond the oil and gas sector.

“Potentially, this bill could provide a basis for building and industrial economy for Nigeria.

“Implementation of the Paris Agreement has seen a continuous global transition away from fossil fuels towards renewables as primary energy source.

“The PIB will join the National Petroleum Policy and the National Gas policy in defining the environment for investment in the oil and gas sector and also influence sentiment around Nigeria as an investment destination.”

A statement by the Special Adviser to the President on Media and Publicity, Femi Adesina had confirmed the meeting and the position of the council on the issues. Although Adesina avoided the subsidy debate.