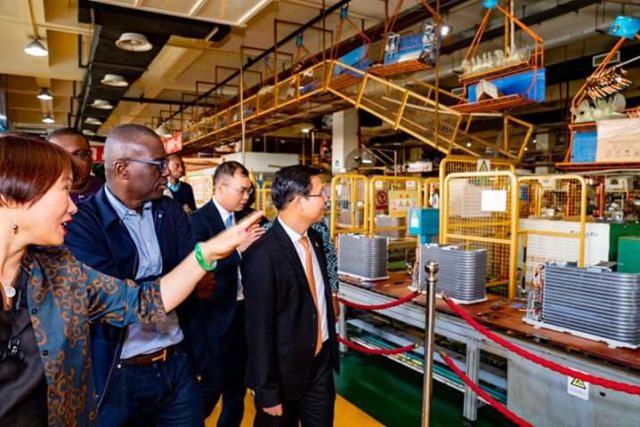 Lagos State Governor Babajide Sanwo-Olu on Sunday engaged the leadership of Gree Electrical Appliances on the possibility of citing their plant in Lagos to support the Fortune 500 Company’s expansion into Africa.

The Governor, while on a tour of the company’s expansive facility in Zhuhai, China, told the company’s leadership, including Xie Dong Bo, the Company’s Assistant President, who represented Madam Dong Mingzhu, the President and Chairperson during the facility inspection, that “Lagos State is open to socially responsible and viable companies like Gree Electric Appliances”.

“As you know, Lagos is the largest city in Africa, with a population of over 22 million people. The State’s economy is the 7th largest on the continent of Africa. The State is central for easy distribution of products and a fertile ground for recruiting a highly skilled workforce that will help further the innovation for which Gree Electric Appliance is globally reputed”, Sanwo-Olu added.

Allaying the fear of the company’s management about the challenges of doing business in Lagos, Sanwo-Olu told the potential investors in the State’s economy that “every region of the world has its own peculiar challenge(s). Even here in China, you have your own issues, but your challenges may not be what our challenges are in Lagos”.

“However, the good news is that Lagos State is committed to innovation and excellence in everything we do. We have our eyes on the ball and the Government I lead is leaving no stone unturned in ensuring that business processes are simplified enough to support entrepreneurial efforts to grow and succeed. We are the major driver of Nigeria’s 15-place improvement on the World Ease of Doing Business Index, and we will continue to drive the process for the continual ascension of Nigeria on the Index”, he said.

He said: “Gree Electric Appliances is grateful for the invitation and the opportunity to expand into Lagos. With this invitation, we see an opportunity to increase our share of the air-conditioning market to 35% and our annual production capacity of Residential Air-Conditioners (RAC) and Central Air-Conditioners (CAC) from more than 60 million and 5.5 million sets respectively.”

“In addition to being in Brazil and Pakistan, we want to be manufacturing and packaging our products in Lagos. So, this invitation aligns with our expansion goal and the company will seriously deliberate on this, because Nigeria is a big market for our products”, Bo added

Gree Electric Appliances Inc. of Zhuhai is an international air conditioning enterprise, which has integrated research & development, manufacturing, marketing and service into its operations. Initially assembling residential air conditioners, the company has over the years diversified into a technological global group, with expanded operations to air-conditioners, home appliances, high-end equipment and communication apparatuses sold widely in over 200 countries.

In 2015, Gree Electric Appliances ranked 385 in Forbes Global 2000 and number one in the household appliances industry. Two years later, the company, which started operations in 1991, was listed among the world’s top 500 public companies. It has been number one in the production and sale of residential air conditioners since 2005. Its sales revenue is over $16.51bn. The company paid up to $12.21bn in tax to become the foremost taxpayer in the home appliances industry in China for 15years consecutively.

38 New SANs To Be Sworn-In On Monday