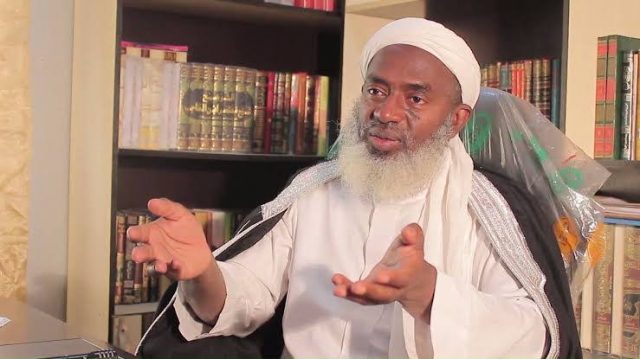 Islamic cleric Dr Ahmad Gumi has diclosee that most of the bandits who are killing and kidnapping people are “stark Illiterates”.

He also blamed the rising spate of banditry, kidnapping and insecurity nationwide on the failure of governments at all levels to fund the education sector in line with the United Nations Educational Scientific and Cultural Organisation (UNESCO).

Gumi, however, challenged the federal government to imitate former President Jonathan Goodluck’s approach to security challenges by educating young Fulanis that resorted to criminalities due to poverty and unemployment.

Gumi made this recommendation at a virtual policy dialogue organised by the Nigerian Global Affairs Council (NIGAC), a digital media-driven and evidence-based think-tank focusing on governance and public policy.

During the dialogue, the Islamic leader urged Nigeria to see security challenges as a social problem, which according to him, could not be solved by military prowess.

He explained that it was time for sociologists, criminologists and psychologists in the country to come together and understand how to resolve the menace.

He, however, attributed insecurity in the country to poor funding of the education sector in breach of the 26% budget allocation that the United Nations Educational Scientific and Cultural Organisation (UNESCO) recommended for every country.

He, also, said: “Nigeria is a target of many different international interest groups. For us who have been in the military, we go to the bush; we do exercises in the bush, you never get attacked and in fact you do not fear Fulani men.

“So, what has suddenly changed? These are the questions I think sociologists, criminologists and psychologists should all put their heads together and see a way out. But it is not by force that we can subdue these people. I do not see that.”

On how to solve the problem, the cleric advocated the need “to improve funding in the education sector of the country. The standard by the United Nations is that education should have about 15 to 20 percent of the budget.

“In Nigeria, it is about nine to 10%. We are not spending much on education and human capital development at large. We have entirely forgotten the Human Development Index (HDI). That is exactly what we are suffering from.

“This kidnapping and banditry you see is committed by people who are stack illiterate. They are not educated at all. Most of them have never been to schools. They know nothing. They are always on drugs.

“And there are so many in numbers. If you want to cure it you have to solve it as a social problem not as a military problem, the military cannot solve it,” the Islamic leader explained.

The Islamic leader noted that the federal government “should just accept Jonathan’s approach. Jonathan’s principle is the only solution. Let us educate these Fulani people because without education, we are wasting our time.”

Gumi recently called on government to declare amnesty and enter into dialogue with bandits with a view to end it.

Wealthy, Connected Persons Defy Lockdown To Travel In And Out Of Nigeria