MENUMENU
Home PAST & PRESENT FOR THE RECORDS THERE IS SO MUCH TO DO TURNING POWER SUPPLY AROUND; AND WE...
Facebook
Twitter
WhatsApp
Linkedin
Email
Telegram 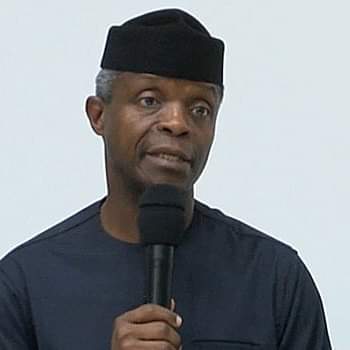 SPEECH BY HIS EXCELLENCY, PROF. YEMI OSINBAJO, SAN, GCON, VICE PRESIDENT OF THE FEDERAL REPUBLIC OF NIGERIA, AT THE COMMISSIONING OF NDPHC PROJECTS IN ABEOKUTA AND ITS ENVIRONS ON THE 15TH OF AUGUST, 2019

I am honoured to commission today, the Niger Delta Power Holding Company (NDPHC) reinforcement projects around the Abeokuta environs and also the Transmission Company of Nigeria (TCN) projects.

This commissioning is an important part of the Federal Government’s efforts to improve the supply and quality of power to homes and businesses in Nigeria.

Indeed, in the past few years, resolving the power supply problem has been top priority for the Federal Government of Nigeria. Permit me to give a brief update on the state of the power sector today and a glimpse into the very near future.

Today, we have about 13,427MW of installed capacity, and an available capacity of about 8,342MW. This was achieved through the efforts of government and its private sector partners in the rehabilitation and commissioning of turbines in Shiroro, Egbin, Delta Power, Sapele and Gbarain.

In the long term, several solar plants will come on stream. The national grid already has the capacity to transmit 7,000MW, an increase from less than about 5,000MW in 2015 and this is due to the completion and improvement of several transmission projects. We have been told by the MD of NDPHC, Mr Chiedu Ugbo, the completion of projects already done by TCN, like the Ikot Ekpene switching station and the completion of the Ikot Ekpene-Ugwuaji-Makurdi-Jos loop, which was done by the NDPHC in 2017. But distribution capacity in the 11 DisCos are significantly low, hovering at around 4,000MW on average with a peak of about 5,400MW.

So, despite the availability of 8,000MW of generation and 7,000MW of transmission capacity, the lack of DisCos’ infrastructure to absorb and deliver grid power to end users has largely restricted generation to an average of about 4,000MW and sometimes falling below 4,000MW.

Apart from the lack of infrastructure is the inability of DisCos, first, to provide distribution assets generally and also metering, and you have heard what the MD of TCN said about the unavailability of distribution assets, there is also the unavailability to provide metering to consumers. In resolving this issue, the Federal Government stepped in through the Nigerian Electricity Regulatory Commission’s (NERC) Meter Asset Provider (MAP) Regulation of 2018. This is essentially regulation to provide metering, through independent or third parties to consumers all across Nigeria.

On May 1 2019, MAPs, commenced meter rollout; over 250,000 applications have been received and processed by DisCos to date and of course, that is then supposed to be forwarded to MAPs for installation. This figure is expected to quadruple by the end of 2019, and double by the end of 2020, largely closing the current metering gap of about 5.3million consumers.

But it is evident, despite all the efforts that has been put into trying to expand the national grid and do a lot more, and of course, we have also heard that there is need to recapitalize the Discos, but despite all the efforts so far, it is evident that the structure of the market today cannot deliver on the government’s promises to give power for domestic and industrial use. A substantial change of strategy is necessary. What we have done in the past has taken us to a point but clearly, there is a need for change of strategy.

The Siemens Electrification Project must not be seen as all there is to enhancing transmission and distribution. the TCN still has a major role to play in all the various projects that the TCN itself has dedicated itself to doing. At the same time, the DisCos must come up with more capacity and resources to upgrade what they have been doing and ensure distribution assets are available including metering.

Second is the opening up of the market to new investors in generation, transmission and distribution infrastructure, transacting directly with each other to serve willing customers, including deploying off-grid power and using micro-grids, especially for deployment of solar power.

Now we have successfully done this in Sabongari market, Kano; Ariaria market in Aba and recently, we launched the first of several solar power plants in Universities with the 2.8MW plant at the Alex Ekwueme Federal University in Ebonyi State. Over the course of the next few months, the Federal University of Petroleum Resources, Effrun Delta and Bayero University in Kano will have their off-grid Solar Hybrid Systems commissioned.

In each of these places, a private power provider is licensed to provide end-to-end power for a particular community or cluster, usually on a willing-buyer-willing-seller basis.

The policies and regulations to empower customers to get the services they want at prices they agree to, are largely in places because we already have the law that allows willing-seller-willing-buyer arrangement and the different categories of those laws.

The second is the Mini-Grid Regulation, 2016, which was issued on the 24th of May 2017. This allows for unserved or underserved customers of a distribution company to be supplied power on agreed terms by a developer of a grid-connected or an independent electricity distribution system, with an embedded power station of up to 1MW.

Then we have Eligible Customer Regulation issued on the 1st of November, 2017. This allows for unserved or underserved consumers of more than 2MW of power, to buy power on agreed terms, directly from generating companies who have contracted with providers and operators of transmission and distribution infrastructure for its delivery.

The last is the Electricity Distribution Franchising Regulation, which is still in public consultation and preparatory to its issuance of regulations that will govern it. The whole idea is that it sets out the rules for a distribution company to appoint, or be compelled to cede consumers who will be connected to a 33kV or 11kV feeder, or a designated area to an agent or third party, willing to make investments in lines, metering, transformers and other equipment to serve the customers better at a mutually agreed tariff.

Now with a lot of these policies, the whole idea of it is to create a regime whereby there can be more willing-buyer-willing seller arrangements. It is in my view completely impossible, to satisfy Nigeria’s power demands from the national grid alone. There must be independent power suppliers and this why we have all these regulations for micro-grid and other willing-buyer-willing-seller arrangements and that is the way by which we can go forward and ensure that we are able to serve many of the unserved and underserved communities that we have today.

These polices when fully implemented, will enable the opening up of the market to new investors in generation, transmission and distribution infrastructure, transacting directly with each other, to serve willing customers and this is the way which the Federal Government will proceed to ensure that we increase some more opportunities to existing DisCos and to other investors who may wish to serve Nigeria’s huge power market, which of course, at the moment is terribly underserved.

But back to today’s land mark event. Electricity supply to Ogun state, especially along the axis of Otta right up to Abeokuta the State capital, was initially via a Double Circuit 132kV line into Otta. It was supplied from a 330/132/33kV Grid Transformer Substation at Ikeja West, which serves as a marshalling station for several power plant inflows into Lagos.

A 130MVA capacity substation was built at this Otta location for supply to Otta and environs. Out of Otta, a single circuit lower capacity 132kV line was built to connect Abeokuta via an intermediate 132/33kV Substation at Papalanto within the premises of Lafarge Cement Company. The Abeokuta Substation was also equipped with 2X40MVA 132/33kV transformers for suppling Abeokuta and its environs.

Over time, all these facilities became overloaded and lacking capacity to cater to growing demand in these locations. So, this is why government felt the need, through the NDPHC, to design a set of transmission projects to resolve this problem and with various segments which we have heard today. Particularly today we have:

· A new 2X60MVA 132/33kV Substation was built here at Kobape in Abeokuta and named New Abeokuta with facilities for six (6) 33kV feeders offtake for improved supply to the growing Ogun State Capital and its environs.

We expect that these reinforcements of existing transmission and distribution infrastructure will substantially improve power supply in the Abeokuta axis.

We know that with all the work that is being done, and what we have also heard, the various ideas that our very dynamic governor has laid out in Ogun State, we are sure that power supply in Ogun State is bound to grow in leaps and bound. And so, in the next few weeks we will be commissioning and formally declare open the NDPHC Intervention on all the projects in Abeokuta and environs.

I want to thank you very much for making the time to attend this event and to thank the NDPHC and TCN, for the very hard work and our host governor, Dapo Abiodun, for ensuring that we are well accommodated and we are very hospitably treated.

Thank you very much. God bless you.