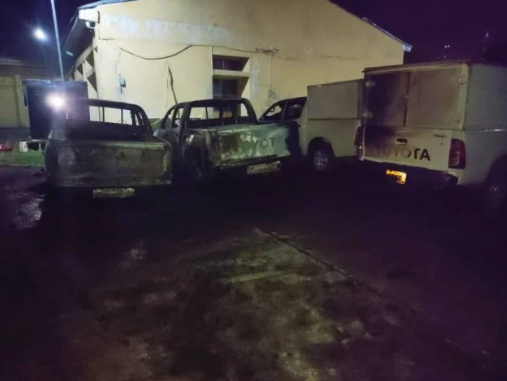 The Independent National Electoral Commission (INEC) head office in Enugu, Enugu state has been attacked by the unknown gunmen.

This is coming days after it’s local government office in Udenu Local Government Area of the state was gutted by fire.

The attack in Enugu head office took place on Sunday night. Although, it was mainly official vehicles that were destroyed.

It was learnt that hoodlums numbering about seven in a Mini-Bus stormed the premises of the commission located near Enugu State Broadcasting Service at Independence Layout and set fire to six Hilux vehicles, five of which were completely burnt. The sixth was partially destroyed.

They reportedly tried to set buildings in the premises ablaze but were resisted by armed security operatives guarding the premises. Some furniture in one of the offices were said to have caught fire before firefighters arrived.

Residents of the area said they heard sounds of gunshots at about 10pm before the inferno but could not ascertain those responsible for the shooting.

The state INEC Resident Electoral Commissioner, Emeka Ononamadu, confirmed the incident when contacted on the telephone.

He said that some vehicles on the premises were affected but the office buildings were saved.

He said, “Firefighters were alerted shortly after the inferno was noticed and they rushed to the scene to prevent the fire from spreading to the main office complex.”

Meanwhile, the state Commissioner of Police, Mohammed Aliyu, has ordered a manhunt of the perpetrators and emplacement of adequate security around the area.

The Commissioner, through the Command’s spokesman, Daniel Ndukwe, in a statement, said “yet to be identified armed miscreants, on Sunday, 16/05/2021 at about 2030hrs, attempted to set the Enugu Headquarters of the Independence National Electoral Commission (INEC) ablaze but were stiffly resisted by joint security operatives who swiftly mobilized to the scene.

“The State Fire Service personnel, who promptly responded to calls put across to them, helped in quenching the fire already set on four vehicles and two cushions within the office premises.

“Meanwhile, the Commissioner of Police, Mohammed Aliyu, who immediately raced to the scene alongside Heads of other Security Agencies in the State, has ordered the emplacement of adequate security within the precincts of the office and the launch of a full-scale investigation to unravel the mystery behind the act as well as fish out the assailants.”

Ndukwe quoted the Commissioner to have enjoined law-abiding citizens of the state to remain vigilant and promptly volunteer useful information that would help the Police in their investigation.

Meanwhile, armed security operatives were said to have cordoned off the area while men of the State Fire Service were still on the premises with their equipment as of press time.

On Thursday, the INEC office at Udenu was razed down which police however said was caused by a power surge.