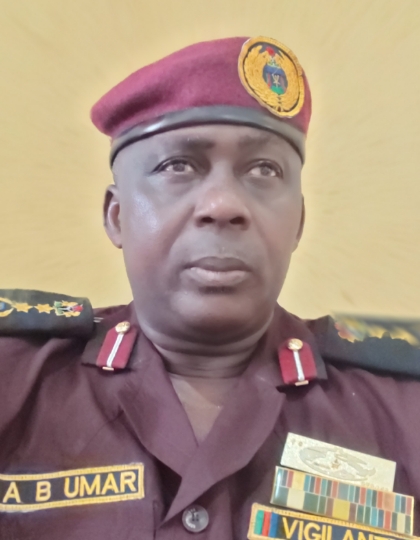 Vigilante Group of Nigeria (VGN) has existed in the country for nearly 30 years. Although it was registered with the Corporate Affairs Commission in 1998, its role has gone beyond just a mere association.

The group with more than a million members want to be given legislative teeth by becoming an act of parliament. They want to contribute to securing the country by insisting they know community policing better than the police.

Already they help with numerous assignments across the country including having its members work with the military in Borno as Civilain JTF. A group working to stamp out terrorism in the North East.

Q: How did the Vigilante Group of Nigeria come about, and what is your membership strength?

A: Vigilante group of Nigeria (VGN) is an organization with over one million membership. It is the only private security organization that has a network covering the entire country. We started in the 1990s, but got registered in 1998 just before democracy was restored in 1999. If you recall, the Kafanchan and Zango Kataf crisis of that time in Kaduna necessitated the coming together of community residents who tried to find away to protect themselves due to the insecurity of the time.

We also have the largest membership which is more than the strength of all the regular security agencies in Nigeria.

The members operate and reside within their own communities and are in all the 774 Local Governments and wards.

Q: How will your organisation assist the new community policing strategy of the government?

A: VGN personnel can serve as an important component of first line of defense in the new community policing when given the opportunity.

Q: There are a lot of ungoverned spaces in Nigeria. We see what Boko Haram has done in Sambisa and what kidnappers and other criminal elements do around the country, how will VGN help sister security agencies and indeed the government solve secure these spaces?

A: The issue of peace and security should be viewed from a broader perspective but all encompassing. VGN members can be used for the protection of critical national assets, addressing cattle rustling and herdsmen/ farmers clashes and addressing the plights of internally displaced persons. VGN lost many gallant officers in the course of fighting bandits in almost all the states in Nigeria. Unlike the NPF, VGN is community based approach to management of crime.

Q: How vast can you cover the country considering how large it is, what will you do differently?

Truly they have the advantage of knowing the terrain better, being local residents, they are capable of assisting in addressing local security challenges like protection of National critical assets and conflicts prevention.

Q: Are you different from what we have seen of other security personnel?

Q: In which areas have you helped even before you are formalised in the security well-being of our communities?

A: During the recent lockdown as a result of COVID-19, our members volunteered and worked with various security agencies in the protection, monitoring and the distribution of palliatives. Our members have also worked closely together with sanitation workers in fumigation, traffic control on land, creeks and inland waterways. Therefore we see the pandemic of COVID-19 more as a window of Strategic opportunity to improve on our security in all its multidimensional ways.

Q: What is withholding the bill from the president’ s signature, considering that the bill has been approved by the National Assembly?

A: We as members of VGN are appealing to our president and Commander in Chief of the Armed Forces to look into our bill viz our relevance in the local security and Intelligence networking in Nigeria.

VGN is presently working together with the military, Nigeria Police, NDLEA, NSCDC, SSS, Customs and Immigration. Therefore, if given legal backing our members will surely complement the effort of our security agencies better.

Considering the fact that our strength is more than that of all the security agencies put together, we can easily fit in as Community Police or National Guard.

Additionally our personnel know the terrain better because they live and operate in their respective localities. Importantly, in order to check and minimize the possibilities of criminals parading themselves as our members, all our members are now registered with NSCDC, a database has been open for our members and PSID numbers are issued to each and this PSID number double as their chest number and Service number which is reflected in their ID cards. With this we can easily identify fake members in our midst.

Q: What else can the VGN do?

A: Apart from the old oil pipelines, Nigeria has over 3,000 km newly build gas/petroleum pipelines, Great Green Wall Nigeria, Inland Waterways and Creeks, Railway stations and lines and more than 30 Power plants, vast farmland and many other Key Positions (KPs) and Vulnerable Points (VPs) which our members are capable of protecting in their various areas as first line of Defense if given the opportunity.

Q: Your organisation is not immune from squabbling. We understand you have factions, so which is the authentic VGN?

A: With the demise of Alh. Ali Sokoto, VGN is now united under my leadership. The organization was never joined in the legal battle for the leadership between Alh Ali Sokoto and Alh Usman Muhammad Jahun. The National Executive Council had officially handed over to me the official Certificate, Seal and the VGN only account with First Bank Plc and we have started investigating how the organization funds were spent in the last 10 years.

Most importantly, we commend president Muhammadu Buhari for his efforts to deal with the security situation in the country. Together we can help do more.

Q: Funding is a major problem for government, how do you intend to fund this organisation?

A: You know our membership is drawn from the communities. So we don’t need barracks, we don’t so much from government. Our people work from their homes within the communities so they need relocations. They just focus and gather intelligence and escalate same.

So it will be good if government officials who receive security votes dedicate a fraction for paying these volunteers.

Also communities can help. There was a community in Kebbi that helped raise I we 30 million to support our people there because they saw the work we did. So community donations, corporate assistance and government’s will go a long way in keeping our members happy and getting them to do their job.

Why Three Lagos Commissioner-Nominees Were Dropped

CBN: You Can Have Your Forex Remittances In Cash, Dom Account